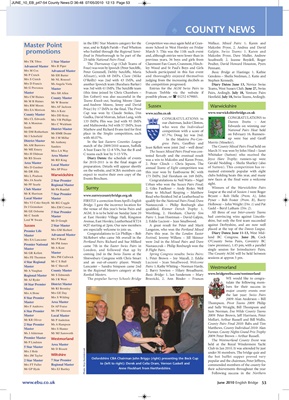 in the EBU Star Masters category for the Competition was once again held at Cran- Wallace. Mixed Pairs: 1. Karen and

promotions who battled through the Regional Semi-

final in Peterborough to be part of the

March 5. This was the 11th such event

and, although entries were lower than in

Mrs S Cretch Mr NL Roussel O’Reilly) was 2nd with 43 IMPs, and judging from the increasing decibels as Stephen Kennedy.

Mrs EA Morison Price) by 17 IMPs in the final. The Pivot

Smith who won the Indi vidual Edwards on winning our

Mr DM Rotherham competition with a score of

Mr HMR Deane place in the Singles competition, each 67.7%; Doug Jay was 2nd. on February 16. Runners-

Ms AM Burrows Sanders match of the 2009/2010 season, Suffolk The County Mixed Pairs Final held on

Diary Dates: the schedule of events was a win to Malcolm and Karen Pryor, Joyce Hare Trophy; runners-up were

Area Master for 2010-2011 is in the final stages of 2. Peter Clinch – Chris Jepson. The Gerald Nodding – Sheila Sharkey (also

Mrs D Gardner annual Teams of Eight competition was of Sutton). This competition has re -

Mrs SP Price on the website, and SCBA members can

Mrs L Poulson Warwickshire expect to receive their own copy of the 175 IMPs; 2nd Horsham on 169 IMPs. clubs holding heats this year, and many

the venue of this year’s Swiss Pairs and qualified. Kremer Dersch Trophy: 1.

AGM. It is to be held on Sunday June 20 Worthing, 2. Horsham. Charity Sim

Sussex 2 Star Master 6QT starting at 2pm. Our new members A great result for Peter and Marit against Derbyshire, and are now well

Mrs GM Herbert are especially welcome to join us. Langston, who won the Portland Mixed placed at the top of the Dawes League.

Portland Pairs. Richard and Sue Millard were 2nd in the Mixed Pairs and Dave O’County Swiss Pairs, Coventry BC

came 7th in the Easter Swiss Pairs in Nastaszczuk – Philip Roxburgh won the (new premises), 1.45 pm, with a parallel

London, and followed that up by B Flight Pairs. single session for Introductory Pairs.

Mr GR Kellett Master coming 2nd in the Swiss Teams at the Spring Congress results: Swiss Pairs: The County AGM will be held between

Mr A Vaughan County Master in the Regional Masters category at the 2. Barry Sowton – Hilary Broadhurst.

bers for their success in

Mrs J Hole under 50 members. The bridge quiz and

Mrs FT Fuller Regional Master to (left to right): Derek and Celia Oram, Vernon Gaskell and commended members of the county for

Following success in the Northern