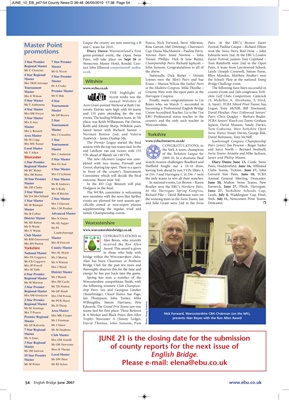 League the county are now entering a B Pearce, Nick Forward, Steve Allerston, Pairs. At the EBU’s Buxton Easter

Edwards were 2nd. At the EBU’s London

Tournament www.wcba.co.uk at the Madeira Congress. Mike Theelke – The following have been successful in

2 Star place, was Keith Williamson, Pat Davies, country and the only such teacher in YCBA Seniors’ Knock-out Teams: Graham

end Latchem ran out victors with 153

Mrs J Anderton VPs ahead of Blandy on 148 VPs. of the Yorkshire League for Swiss Teams: Annette and Mike Jackson,

Worcester 2009-10. In a dramatic final Janet and Philip Mason.

in front of the county’s Tournament

Committee which will decide the final

10 Star Premier 3 Star Master outcome. Baum were 3rd. the only teams to win all their matches. Annual General Meeting, Doncaster.

Mr DA McClelland new members with the news that further

1 Star Master events are planned for next season spe-

Yorkshire County Master Award. This award is given

National Master Mrs SL Hoyle to those who help with

Bridge Club for the past ten years and

Mrs M Tebb thoroughly deserves this for the time and

District Master energy he has put back into the game.

of county reports for the next issue of