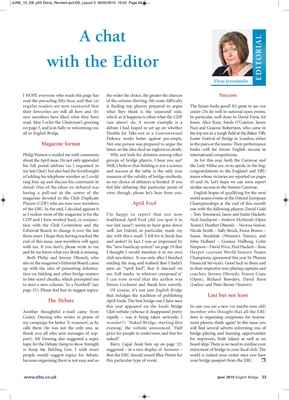 I HOPE everyone who reads this page has the wider the choice, the greater the chances Success

read the preceding fifty-four, and that (a) of the column thriving. My main difficulty

regular readers are now reassured that is finding top players prepared to argue The future looks good! It’s great to see our

their favourites are still all here and (b) what they think is the ‘unsound’ side, under-25s do well in national open events.

new members have liked what they have which as it happens is often what the CDP In particular, well done to David Faria, Ed

read. May I echo the Chairman’s greeting (see above) do. A recent example is a Jones, Alice Kaye, Sarah O'Connor, James

on page 3, and join Sally in welcoming you debate I had hoped to set up on whether Paul and Graeme Robertson, who came in

all to English Bridge. Double for Take-out or a Conventional the top ten in a tough field at the Baker Tilly

Defence works better against pre-empts. Easter Festival of Bridge in London, either

Magazine format Not one person was prepared to argue the in the pairs or the teams. Their performance

latter, so the idea died an inglorious death. bodes well for future English success in

Philip Watson e-mailed me with comments Why not look for debaters among other international competitions.

about the April issue. He not only appended groups of bridge players, I hear you say? As for this year, both the Camrose and

his full postal address (as I requested in Well, I believe that bidding is not a science the Lady Milne are, so to speak, in the bag:

of adding his telephone number so I could measure of the validity of bridge methods, teams whose victories are reported on pages

ring him up and discuss his comments in so my choice of debaters is limited. If you 10 and 16. Let’s hope we can soon report

detail. One of the ideas we debated was feel like debating this particular point of similar success in the Seniors Camrose.

having a pull-out in the centre of the view, though, please let’s hear from you. English hopes of qualifying for the next

of the EBU. In the end, I decided against it rest with the following players: David Gold

as I reckon most of the magazine is for the I’m happy to report that our now – Tom Townsend, Jason and Justin Hackett,

CDP and I have worked hard, in conjunc- traditional April Fool (did you spot it in Nick Sandqvist – Andrew McIntosh (Open

tion with the Club Committee and the our last issue?) seems to have gone down Teams); Heather Dhondy – Nevena Senior,

Editorial Board, to change it over the last well. Ian Dalziel, in particular, made my Nicola Smith – Sally Brock, Fiona Brown –

three years. I hope that, having reached the day with this e-mail: ‘I fell for it, hook line Susan Stockdale (Women’s Teams); and

end of this issue, new members will agree and sinker! In fact I was so impressed by John Holland – Gunnar Hallberg, Colin

with me. If you don’t, please write to me the “new handicap system” on page 19 that Simpson – David Price, Paul Hackett – Ross

and let me know what you think is missing. I thought I would mention it in my own Harper (current World Seniors Teams

Both Philip and Jeremy Dhondy, who club newsletter. It was only after I finished Champions, sponsored this year by Pharon

sits on the magazine’s Editorial Board, came reading the mag and realised that I hadn’t Financial Services). Good luck to them and

up with the idea of presenting informa- seen an “April fool”, that it dawned on to their respective non-playing captains and

tion on bidding and other bridge matters me. Full marks to whoever composed it.’ coaches: Jeremy Dhondy, Simon Cope

in bite-sized chunks, which prompted me I can now reveal that the author was (Open), Richard Bowdery, David Burn

to start a new column, ‘In a Nutshell’ (see Simon Cochemé and thank him warmly. (Ladies) and Peter Baxter (Seniors).

that indulges the tradition of publishing Last but not least

The Debate April Fools. The best bridge one I have seen

Godric Dearing who writes in praise of rapidly – was it being taken seriously, I does is organising congresses for tourna-

my campaign for better ‘E-manners’, as he wonder?): ‘Naked Bridge, starting this ment players, think again! In this issue you

calls them (he was not the only one, so evening,’ the website announced. ‘Half will find several adverts informing you of

thank you all who sent messages of sup- price for people in underwear, and free for bridge-playing and learning opportunities

port). Mr Dearing also suggested a super naked!’ for improvers, both inland as well as on

topic for the Debate: Jump to show Strength Barry Capal (look him up on page 32) board ship. There is no need to confine your

vs Keep the Bidding Low. I wish more suggested – in a rare display of humour – enjoyment of bridge to your local club. The

people would suggest topics for debate, that the EBU should award Blue Points for world is indeed your oyster once you have

because organising them is not easy and so this particular type of event. your bridge passport from the EBU. r