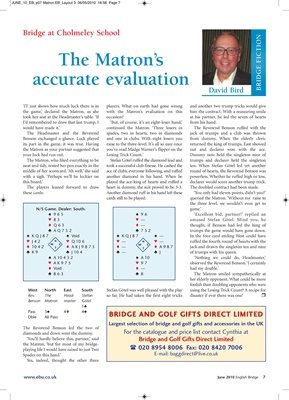 ‘IT just shows how much luck there is in players. What on earth had gone wrong and another two trump tricks would give

the game,’ declared the Matron, as she with the Matron’s evaluation on this him the contract. With a reassuring smile

took her seat at the Headmaster’s table. ‘If occasion? at his partner, he led the seven of hearts

I’d remembered to draw that last trump, I ‘But, of course, it’s an eight-loser hand,’ from his hand.

would have made it.’ continued the Matron. ‘Three losers in The Reverend Benson ruffed with the

The Headmaster and the Reverend spades, two in hearts, two in diamonds jack of trumps and a club was thrown

Benson exchanged a glance. Luck played and one in clubs. With eight losers you from dummy. When the elderly cleric

its part in the game, it was true. Having raise to the three-level. It’s all so easy once returned the king of trumps, East showed

the Matron as your partner suggested that you’ve read Madge Warner’s flipper on the out and declarer won with the ace.

your luck had run out. Losing Trick Count.’ Dummy now held the singleton nine of

The Matron, who liked everything to be Stefan Götel ruffed the diamond lead and trumps and declarer held the singleton

neat and tidy, rested her pen exactly in the took a successful club finesse. He cashed the ten. When Stefan Götel led yet another

middle of her scorecard. ‘Ah well,’ she said ace of clubs, everyone following, and ruffed round of hearts, the Reverend Benson was

with a sigh. ‘Perhaps we’ll be luckier on another diamond in his hand. When he powerless. Whether he ruffed high or low,

this board.’ played the ace-king of hearts and ruffed a declarer would score another trump trick.

The players leaned forward to draw heart in dummy, the suit proved to be 3-3. The doubled contract had been made.

these cards: Another diamond ruff in his hand left these ‘You only had eleven points, didn’t you?’

cards still to be played: queried the Matron. ‘Without my raise to

the three level, we wouldn’t even get to

her elderly opponent. What could be more

foolish than doubling opponents who were

West North East South Stefan Götel was well pleased with the play using the Losing Trick Count? A recipe for

Rev. The Head- Stefan so far. He had taken the first eight tricks disaster if ever there was one! r

The Reverend Benson led the two of

the Matron, ‘but for most of my bridge-

Spades on this hand.’ E-mail: baggdirect@live.co.uk

Yes, indeed, thought the other three