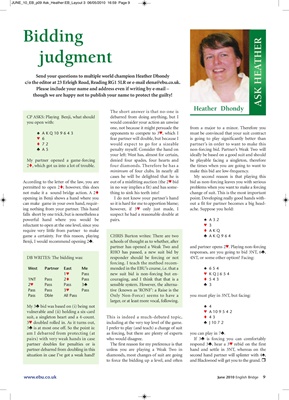 The short answer is that no-one is

CP ASKS: Playing Benji, what should debarred from doing anything, but I

you open with: would consider your action an unwise

one, not because it might persuade the from a major to a minor. Therefore you

™ 6 fear partner will double, but because I is going to play significantly better than

® A5 penalty myself. Consider the hand on non-forcing bid. Partner’s Weak Two will

your left: West has, almost for certain, ideally be based on a good suit and should

2t, which got us into a lot of trouble. four diamonds. Therefore he has a the times when you are going to want to

minimum of four clubs. In nearly all make this bid are low-frequency.

According to the letter of the law, you are out of a misfitting auction (the 2™ bid bid as non-forcing leaves you with serious

permitted to open 2t; however, this does in no way implies a fit) and has some- problems when you want to make a forcing

not make it a sound bridge action. A 2t thing to sink his teeth into! change of suit. This is the most important

opening in Benji shows a hand where you I do not know your partner’s hand point. Developing really good hands with-

can make game in your own hand, requir- so it is hard for me to apportion blame; out a fit for partner becomes a big head-

ing nothing from your partner. This hand however, if 3™ only just made, I ache. Suppose you hold:

falls short by one trick, but is nonetheless a suspect he had a reasonable double at

powerful hand where you would be pairs. ´ A32

reluctant to open at the one level, since you ™ 3

game a certainty. For this reason, playing CHRIS Burton writes: There are two ® AKQ964

Benji, I would recommend opening 2®. schools of thought as to whether, after

partner has opened a Weak Two and and partner opens 2™. Playing non-forcing

RHO has passed, a new suit bid by responses, are you going to bid 3NT, 6®,

DB WRITES: The bidding was: responder should be forcing or not 4NT, or some other option? Facing:

forcing. I teach the method recom -

Pass Dble All Pass Only Non-Force) seems to have a you must play in 3NT, but facing:

suit, a singleton heart and a 4-count. This is indeed a much-debated topic, t 43

3® is at most one off. So the point is: I prefer to play (and teach) a change of suit

am I debarred from protecting (at as forcing, but there are plenty of experts you can play in 7®.

pairs) with very weak hands in case who would disagree. If 3® is forcing you can comfortably

partner doubles for penalties or is The first reason for my preference is that respond 3®, hear a 3™ rebid on the first

partner debarred from doubling in this unless you are playing a Weak Two in hand and settle in 3NT, whereas on the

situation in case I’ve got a weak hand? diamonds, most changes of suit are going second hand partner will splinter with 4´,

to force the bidding up a level, and often and Blackwood will get you to the grand. r