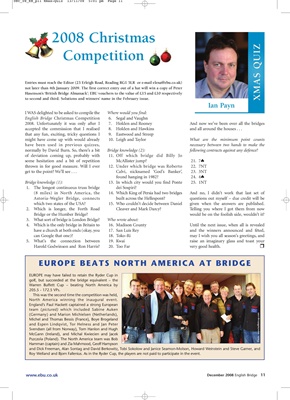 not later than 4th January 2009. The first correct entry out of a hat will win a copy of Peter

Hasenson’s ‘British Bridge Almanack’; EBU vouchers to the value of £15 and £10 respectively

to second and third. Solutions and winners’ name in the February issue.

I WAS delighted to be asked to compile the Where would you find:

2008. Unfortunately it was only after I 7. Holden and Rooney And now we’ve been over all the bridges

accepted the commission that I realised 8. Holden and Hawkins and all around the houses . . .

that any fun, exciting, tricky questions I 9. Eastwood and Streep

might have come up with would already 10. Leigh and Taylor What are the minimum point counts

have been used in previous quizzes, necessary between two hands to make the

normally by David Burn. So, there’s a bit Bridge knowledge (2): following contracts against any defence?

of deviation coming up, probably with 11. Off which bridge did Billy Jo

some hesitation and a bit of repetition McAllister jump? 21. 7♠

thrown in for good measure. Will I ever 12. Under which bridge was Roberto 22. 7NT

(8 miles) in North America, the 14. Which King of Persia had two bridges And no, I didn’t work that last set of

Astoria-Wegler Bridge, connects built across the Hellespont? questions out myself – due credit will be

which two states of the USA? 15. Who couldn’t decide between Daniel given when the answers are published.

2. Which is longer, the Forth Road Cleaver and Mark Darcy? Telling you where I got them from now

Bridge or the Humber Bridge? would be on the foolish side, wouldn’t it?

3. What sort of bridge is London Bridge? Who wrote about:

4. Which is the only bridge in Britain to 16. Madison County Until the next issue, when all is revealed

have a church at both ends (okay, you 17. San Luis Rey and the winners announced and fêted,

can Google that one)? 18. Toko-Ri may I wish you all season’s greetings, and

5. What’s the connection between 19. Kwai raise an imaginary glass and toast your

EUROPE may have failed to retain the Ryder Cup in

golf, but succeeded at the bridge equivalent – the

This was the second time the competition was held,

Svendsen (all from Norway), Tom Hanlon and Hugh

Roy Welland and Bjorn Fallenius. As in the Ryder Cup, the players are not paid to participate in the event.