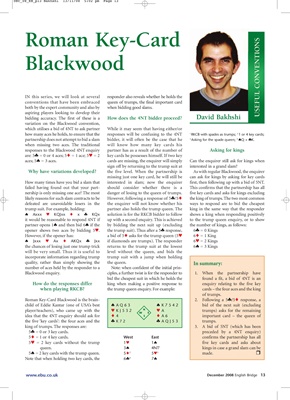 IN this series, we will look at several responder also reveals whether he holds the

conventions that have been embraced queen of trumps, the final important card

both by the expert community and also by when bidding good slams.

aspiring players looking to develop their

bidding accuracy. The first of these is a How does the 4NT bidder proceed? David Bakhshi

variation on the Blackwood convention,

how many aces he holds, to ensure that the responses will be confusing to the 4NT 1

partnership does not attempt to bid a slam bidder, it will often be the case that he 3

when missing two aces. The traditional will know how many key cards his

Why have variations developed? the five level. When the partnership is As with regular Blackwood, the enquirer

missing just one key card, he will still be can ask for kings by asking for key cards

How many times have you bid a slam that interested in slam; now the enquirer first, then following up with a bid of 5NT.

nership is only missing one ace? The most danger of losing to the queen of trumps. five key cards and asks for kings excluding

likely reasons for such slam contracts to be However, following a response of 5♣/5♦ the king of trumps. The two most common

trump suit. For example, holding: partner also holds the trump queen. The king in the same way that the responder

it would be reasonable to respond 4NT if up with a second enquiry. This is achieved to the trump queen enquiry, or to show

partner opens 1♠ and then bid 6♠ if the by bidding the next suit up (excluding the number of kings, as follows:

will be very small. Thus it is useful to level without the queen, and bids the

incorporate information regarding trump trump suit with a jump when holding

quality, rather than simply showing the the queen. In summary:

number of aces held by the responder to a Note: when confident of the initial prin-

Blackwood enquiry. ciples, a further twist is for the responder to 1. When the partnership have

bid the cheapest suit in which he holds the found a fit, a bid of 4NT is an

when playing RKCB? the trump queen enquiry. For example: cards – the four aces and the king

Roman Key-Card Blackwood is the brain- 2. Following a 5♣/5♦ response, a

♥ A trumps) asks for the remaining

king of trumps. The responses are: 3. A bid of 5NT (which has been

5♦ = 1 or 4 key cards. West East confirms the partnership has all