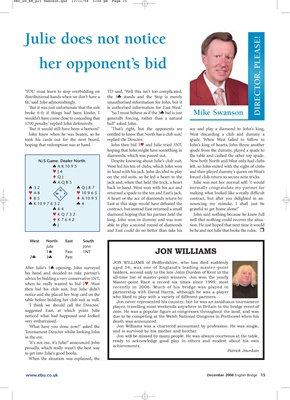 Julie does not notice

‘YOU must learn to stop overbidding on TD said, ‘Well this isn’t too complicated,

fit,’ said Julie admonishingly. unauthorised information for John, but it

‘But it was just unfortunate that the suit is authorised information for East-West.’

broke 6-0; if things had been kinder, I ‘So I must behave as if the 3♣ bid is just Mike Swanson

wouldn’t have come close to conceding that generally forcing, rather than a natural

‘But it would still have been a bottom!’ ‘That’s right, but the opponents are ace and play a diamond to John’s king,

John knew when he was beaten, so he entitled to know that North has a club suit,’ West discarding a club and dummy a

took his cards out for the next board, replied the Director. spade. When West failed to follow to

hoping that redemption was at hand. John then bid 3♥ and Julie tried 3NT, John’s king of hearts, John threw another

hoping that John might have something in spade from the dummy, played a spade to

diamonds, which was passed out. the table and cashed the other top spade.

N/S Game. Dealer North. Despite knowing about Julie’s club suit, Now both North and West only had clubs

♥J4 in hand with his jack. John decided to play and then played dummy’s queen on West’s

♦QJ on the red suits, so he led a heart to the forced club return to secure nine tricks.

♣AQ85 jack and, when that held the trick, a heart Julie was not her normal self: ‘I would

♠QJ87 back to hand. West won with his ace and normally congratulate my partner for

♠64 contract, but instead East returned a small grateful to get home alone!’

♦K7642 king. John won in dummy and was now well that nothing could recover the situa-

♣J able to play a second round of diamonds tion. He just hoped that next time it would

and East could do no better than take his be he and not Julie that broke the rules.

JON WILLIAMS of Bedfordshire, who has died suddenly

After Julie’s 1♠ opening, John surveyed aged 54, was one of England’s leading master -point

his hand and decided to take partner’s holders, second only to the late John Durden of Kent in the

when he really wanted to bid 2♥. West Master-point Race a record six times since 1999, most

recently in 2006. Much of his bridge was played in

then bid his club suit, but Julie didn’t

partnership with David Harris, although he was a player

notice and she placed her Stop card on the

who liked to play with a variety of different partners.

table before bidding her club suit as well. Jon never represented his country, but he was an assiduous tournament

‘I think we should call the Director,’ player, travelling most weekends anywhere in Britain to the bridge event of

suggested East, at which point Julie note. He was a popular figure at congresses throughout the land, and was

‘What have you done now?’ asked the Jon Williams was a chartered accountant by profession. He was single,

Tournament Director whilst looking John and is survived by his mother and brother.

in the eye. Jon will be missed by many people. He was always courteous at the table,

‘It’s not me, it’s Julie!’ announced John ready to acknowledge good play in others and modest about his own

to get into Julie’s good books.

When the situation was explained, the