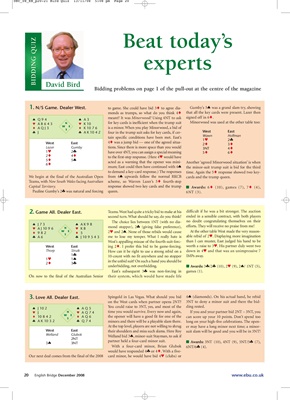 monds as trumps, so what do you think 4♦ that all the key cards were present. Lazer then

meant? It was Minorwood! Using 4NT to ask signed off in 6♦.

♥ A8643 N ♥ K 10 for key cards is inefficient when the trump suit Minorwood was used at the other table too:

Lazer Gumby tions. Since there is more space than you would 3NT 4♦

mum; East could then have continued with 4♠ the minor-suit trump suit is bid for the third

We begin at the final of the Australian Open from 4♠ upwards follow the normal RKCB cards and the trump queen.

2. Game All. Dealer East. Teams. West had quite a tricky bid to make at his difficult if he was a bit stronger. The auction

second turn. What should he say, do you think? ended in a sensible contract, with both players

♦ 5 2♥ and 2♠. None of those rebids would cause At the other table West made the very reason-

West’s appalling misuse of the fourth-suit-forc- than I can muster, East judged his hand to be

West East ing 2♦. I prefer this bid to be game-forcing. worth a raise to 3♥. His partner duly went two

1♣ 10-count with no fit anywhere and no stopper IMPs away.

in the unbid suit? On such a hand you should be

East’s subsequent 3♣ was non-forcing in games (1).

On now to the final of the Australian Senior their system, which would have made life

3. Love All. Dealer East. Spingold in Las Vegas. What should you bid 4♠ (diamonds). On his actual hand, he rebid

on the West cards when partner opens 2NT? 3NT to deny a minor suit and there the bid-

♦ AQ6 the opener will have a good fit for one of the can score up your 10 points. Don’t spend too

At the top level, players are not willing to shrug er may have a long minor next time; a minor-

West East their shoulders and miss such slams. Here Roy suit slam will be good and you will be in 3NT!

Our next deal comes from the final of the 2008 card minor, he would have bid 4♥ (clubs) or