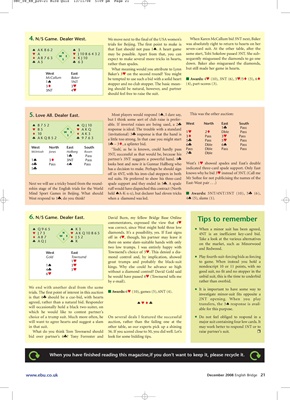 4. N/S Game. Dealer West. We move next to the final of the USA women’s When Karen McCallum bid 3NT next, Baker

trials for Beijing. The first point to make is was absolutely right to return to hearts on her

♦ A8763 S ♦ K J 10 expect to make several more tricks in hearts, sequently misguessed the diamonds to go one

What meaning would you attribute to Lynn but still made her game in hearts.

West East Baker’s 3♥ on the second round? You might

3NT 4♥ ing should be natural, however, and partner

should feel free to raise the suit.

5. Love All. Dealer East. Most players would respond 1♠, I dare say, This was the other auction:

but I think some sort of club raise is prefer-

able. If inverted raises are being used, a 2♣ West North East South

N response is ideal. The trouble with a standard 1♣ Pass

‘Tosh’, as he is known, could hardly pass

1♣ Pass 3NT, successful as that would be, because his

5♣ has a decision to make. Perhaps he should sign indicated three-card spade support. Only East

off in 4NT, with his iron-clad stoppers in both knows why he bid 3♥ instead of 3NT. (Call me

red suits. He preferred to show his three-card Mr Softee for not publicising the names of the

Next we will see a tricky board from the round- spade support and they ended in 5♣. A spade East-West pair . . .)

commentators, expressed the view that 4♥

minor suit has been agreed,

♦ J52 off in 4♥, though, his partner may leave it Take a look at the various alternatives

♣ AQJ ♣ K there on some slam-suitable hands with only on the market, such as Minorwood

two low trumps. I was entirely happy with and Redwood.

West East Townsend’s choice of 5♥. This denied a dia-

mond control and, by implication, showed

great trumps and probably the black-suit

• Playgame. When insteadbids as forcing

without a diamond control? David Gold said good suit, no fit and no stopper in the

he would have passed 4♥ (Townsend tells me unbid suit, this is the time to underbid

by e-mail). rather than overbid.

We end with another deal from the same

is that 4♣ should be a cue-bid, with hearts 2NT opening. When you play

agreed, rather than a natural bid. Responder ♠♥♦♣ transfers, the 3♠ response is avail-

will occasionally hold a black two-suiter, on able for this purpose.

choice of a trump suit. Much more often, he

will want to agree hearts and suggest a slam

On several deals I featured the successful

auction, rather than the failing one at the

• Do not feel obliged four low cards. It

to respond in a

in that suit. other table, so our experts pick up a shining may work better to respond 1NT or to

What do you think Tom Townsend should 56. If you scored close to 50, you did well. Let’s raise partner's suit.

bid over partner’s 4♣? Tony Forrester and look for some bidding tips.