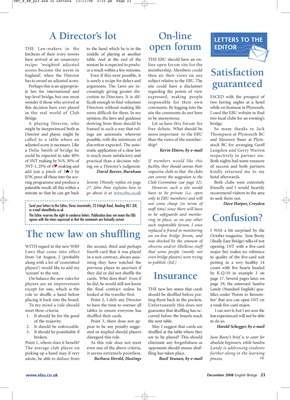 A Director’s lot On-line LETTERS TO THE

kitchens of their ivory towers middle of playing at another

have arrived at an unsavoury table. And at the end of the THE EBU should have an on-

recipe: ‘weighted adjusted session he is expected to produ- line open forum site for the

scores become the norm in

England’, when the Director

ce a result within a few minutes.

Even if this were possible, it

then air their views on any Satisfaction

has to award an adjusted score. is surely a recipe for delays and subject relative to the EBU. The

Perhaps this is an appropria- arguments. The Laws are in- site could have a disclaimer guaranteed

top-level bridge, but one must cretion to Directors. It is dif- expressed, making people FACED with the prospect of

this decision have ever played Directors without making life comments. By logging into the while on business in Plymouth,

in the real world of Club more difficult for them. In my site the comments do not have I used the EBU website to find

Bridge. opinion, the laws and guidance to be anonymous. two local clubs for an evening’s

A playing Director, who deriving from them should be Let us have this forum for bridge.

might be inexperienced both as framed in such a way that rul- free debate. What should be So many thanks to Jack

Director and player, might be ings are automatic wherever more important to the EBU Thompson at Plymouth BC

called to a table where an possible, with the minimum of than the views of the member- and Maureen Baser at Plym-

adjusted score is necessary. Like discretion expected. The auto- ship? stock BC for arranging Geoff

a Delia Smith of bridge he matic application of a clear law Kevin Elstow, by e-mail Langdon and Gerry Warren

could be expected to take 40% is much more satisfactory and respectively to partner me.

of 3NT making by N/S, 30% of practical than a decision rely- If members would like this Both nights had some measure

3NT-1, 25% of 4♥ making and ing on a Director’s judgment. facility, they should canvas their of success and both partners

add just a pinch of 3♠-3 by David Beever, Burnham respective clubs so that the clubs kindly returned me to my

E/W, pour all these into the sco- can convey the suggestion to the hotel afterwards.

palatable result; all this within a 27. John Pain explains how to However, such a site would friendly and I would heartily

minute so that he can get back go about it at www.ebu.co.uk have to be private (i.e. open recommend visitors to the area

only to EBU members) and will to seek them out.

not come cheap (in terms of Dave Harper, Croydon

or e-mail elena@ebu.co.uk staff time) since there will have

The Editor reserves the right to condense letters. Publication does not mean the EBU to be safeguards and monito-

agrees with the views expressed or that the comments are factually correct. ring in place, as on any other Confusion?

such responsible forum. I once

The new law on shuffling an on-line bridge forum, and

was shocked by the amount of

(Really Easy Bridge) talks of not

WITH regard to the new WBF the second, third and perhaps obscene and/or libellous stuff opening 1NT with a five-card

from 1st August, I (probably in a suit contract, always assu- even bridge players) were trying to quality of the five-card suit

along with a lot of ‘committed ming they have watched the to publish. (Ed.) putting in a very healthy 14

On balance the new rules for cards. Who does that? Even if Insurance page 17. Several pages later, on

players are an improvement he did, he would still not know page 29, the esteemed Sandra

except for one, which is the the final contract unless he THE new law states that cards Landy (Standard English) qua-

rule to shuffle a hand before looked at the traveller first. should be shuffled before put- lifies under ‘Points to Remem-

placing it back into the board. Point 2, I defy any Director ting them back in the pockets. ber’ that you can open 1NT on

To my mind a rule should to have the time to oversee all Unfortunately this does not a weak five-card major.

meet three criteria: tables to ensure everyone has guarantee that shuffling has oc- I can sort it, but I am sure the

1. It should be for the good shuffled their cards. curred before the boards reach less experienced will not be able

of the majority. Point 3, there does not ap- the next table. to do so.

2. It should be enforceable. pear to be any penalty sugge- May I suggest that cards are Harold Schogger, by e-mail

3. It should be punishable if sted or implied should players shuffled at the table where they

broken. disregard this rule. are to be played? This should June Booty’s brief is to cater for

Point 1, whom does it benefit? As this rule does not meet eliminate any forgetfulness as absolute beginners, while Sandra

The average club player on even one of the above criteria, opponents should ensure shuf- Landy is addressing students

picking up a hand may, if very it seems extremely pointless. fling has taken place. further along in the learning