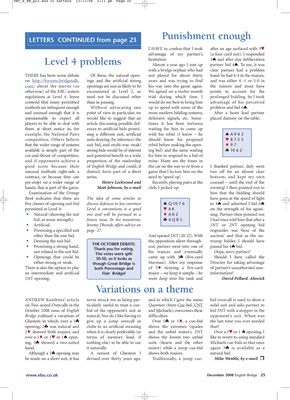 advantage of my partner’s (a four-card suit). I responded

Almost a year ago I met up

3♠ and after due deliberation

with a bridge orphan who had clear partner had a problem

THERE has been some debate Of these, the natural open- not played for about thirty hand: he had 4-4 in the majors,

on http://forums.bridgetalk. ings and the artificial strong years and was trying to find and was either 4 -1 or 5-0 in

com/ about the merits (or openings are just as likely to be his way into the game again. the minors and must have

otherwise) of the EBU system encountered at Level 2, so We agreed on a twelve month points to account for the

regulations at Level 4. Some need not be discussed other trial during which time I prolonged bidding. So I took

contend that many permitted than in passing. would do my best to bring him advantage of his perceived

methods are infrequent enough Without advocating one up to speed with some of the problem and bid 6♠.

and unusual enough that it is point of view in particular, we more modern bidding systems, After a heart lead partner

unreasonable to expect all would like to suggest that an defensive signals, etc. Some- placed dummy on the table:

them at short notice in, for ences to artificial bids promi- waiting for him to come up

example, the National Pairs sing a different suit, artificial with his rebid (I know – he ♠ A942

competition. Others believe suits denying (by inference) the should know his proposed ♥ 8753

that the wider range of systems suit bid, and multi-way weak/ rebid before making the open- ♦ 97

cut-and-thrust of competition, and potential benefit to a wide for him to respond to a bid of

and if opponents achieve a proportion of the readership mine. Many are the times in

good score because their of English Bridge and could, if the car on the way to or from a I thanked partner, duly went

unusual methods right-side a desired, form part of a short game that I lecture him on the two off for an almost clear

contract, or because they can series. need to ‘speed up’. bottom, and kept my own

pre-empt on a wider range of Henry Lockwood and Recently, playing pairs at the counsel – until the end of the

hands, that is part of the game. Matt Johnson, by e-mail club, I picked up: evening! I then pointed out to

Examination of the Orange him that the bidding should

permitted at Level 4: Level 4 conventions is a good ♥ AK on the strength of his agoni-

• Natural (showing the suit one and will be pursued in a ♦ AK2 sing. Partner then pointed out

bid, at some strength). future issue. In the meantime, ♣ AQ85 I had once told him that after a

• Promising a specified suit page 27. responder was ‘boss of the

the opposition silent through- trump bidder I should have

Thank you for voting.

out, partner went into one of passed his 4♠ bid.

not related to the suit bid. The votes were split

either strong or weak. though Great Bridge is Stayman). After my response Director for taking advantage

an intermediate and artificial Flair Bridge! major – we keep it simple – he information?

Variations on a theme

on Two-suited Overcalls in the ticularly useful to treat a cue- Quantum (from Cue-bid, UNT solid suit and asks partner to

October 2008 issue of English bid of the opponent’s suit as and Michaels), overcomes these bid 3NT with a stopper in the

Bridge outlined a variation of natural. Nor do I like having to difficulties: opponent’s suit. When was

Ghestem in which, over a 1♣ give up a jump overcall in Over 1♣ or 1♦, a cue-bid the last time you ever needed

opening, 2♣ was natural and clubs to an artificial meaning shows the extremes (spades that?

over a 1♦ or 1♥ or 1♠ open- terms of memory load, if shows the lowest two unbid like to revert to using standard

ing, 3♣ showed a two-suited nothing else) to be able to use suits (hearts and the other Michaels cue-bids so that once

hand. it naturally. minor) while a jump cue-bid again 3 ♣ is available as a

Although a 1♣ opening may A variant of Ghestem I shows both majors. natural bid.

be made on a short suit, it has devised over thirty years ago, Traditionally, a jump cue- Mike Wenble, by e-mail