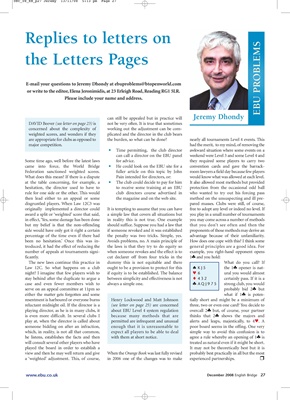 Replies to letters on

can still be appealed but in practice will Jeremy Dhondy

DAVID Beever (see letter on page 23) is not be very often. It is true that sometimes

weighted scores, and wonders if they plicated and the director in the club bears

are appropriate for clubs as opposed to the burden, so what can be done? nearly all tournaments Level 4 events. This

major competition. had the merit, to my mind, of removing the

• Time permitting, the club director awkward situation where some events on a

Some time ago, well before the latest laws for advice. they required some players to carry two

came into force, the World Bridge • He could look on the EBU site for a convention cards and gave the barrack-

What does this mean? If there is a dispute Pain intended for directors, or: would know what was allowed at each level.

at the table concerning, for example, a • The club could decide to pay for him It also allowed most methods but provided

hesitation, the director used to have to to receive some training at an EBU protection from the occasional odd ball

rule for one side or the other. This would club directors course advertised in who wanted to try out his forcing pass

then lead either to an appeal or some the magazine and on the web site. method on the unsuspecting and ill pre-

disgruntled players. When Law 12C3 was pared masses. Clubs were still, of course,

originally implemented a director could It is tempting to assume that you can have free to adopt any level or indeed no level. If

award a split or ‘weighted’ score that said, a simple law that covers all situations but you play in a small number of tournaments

in effect, ‘Yes, some damage has been done in reality this is not true. One example you may come across a number of methods

but my belief is that the non-offending should suffice. Suppose you had a law that that you don’t see often and then the

percentage of the time even if there had the penalty was two tricks. Simple, yes. advantage because of their unfamiliarity.

been no hesitation.’ Once this was in- Avoids problems, no. A main principle of How does one cope with this? I think some

troduced, it had the effect of reducing the the laws is that they try to do equity so general principles are a good idea. For

number of appeals at tournaments signi- when someone revokes and the effect is to example, you right-hand opponent opens

ficantly. cut declarer off from four tricks in the 1♣ and you hold:

The new laws continue this practice in dummy this is not equitable and there What do you call? If

Law 12C. So what happens on a club ought to be a provision to protect for this ♠ KJ5 the 1♣ opener is nat-

night? I imagine that few players wish to if equity is to be established. The balance ♥6 ural you would almost

stay behind after the duplicate to argue a between simplicity and effectiveness is not ♦ 432 certainly pass. If it is a

case and even fewer members wish to always a simple one. ♣ AQJ975 strong club, you would

reluctant midnight oil. If the director is a (see letter on page 25) are concerned three, two or even one card? You decide to

playing director, as he is in many clubs, it about EBU Level 4 system regulation overcall 2♣ but, of course, your partner

is even more difficult. In several clubs I because many methods that are thinks that 2♣ shows the majors and

play at, when the director is called about permitted are infrequent and unusual alerts and leaps, majestically, to 4♥. A

someone bidding on after an infraction, enough that it is unreasonable to poor board seems in the offing. One very

which, in reality, is not all that common, expect all players to be able to deal simple way to avoid this confusion is to

he listens, establishes the facts and then with them at short notice. agree a rule whereby an opening of 1♣ is

will consult several other players who have treated as natural even if it might be short.

a ‘weighted’ adjustment. This, of course, in 2006 one of the changes was to make experienced partnerships.