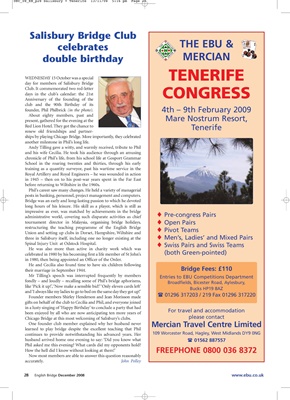 WEDNESDAY 15 October was a special

day for members of Salisbury Bridge

days in the club’s calendar: the 21st

Anniversary of the founding of the

club and the 90th Birthday of its

About eighty members, past and

present, gathered for the evening at the Mare Nostrum Resort,

Red Lion Hotel. They got the chance to

another milestone in Phil’s long life.

and his wife Cecilia. He took his audience through an amusing

chronicle of Phil’s life, from his school life at Gosport Grammar

School in the roaring twenties and thirties, through his early

training as a quantity surveyor, past his wartime service in the

Royal Artillery and Royal Engineers – he was wounded in action

before returning to Wiltshire in the 1960s.

Phil’s career saw many changes. He held a variety of managerial

long hours of his leisure. His skill as a player, which is still as

impressive as ever, was matched by achievements in the bridge

restructuring the teaching programme of the English Bridge

Union and setting up clubs in Dorset, Hampshire, Wiltshire and ♦ Pivot Teams

three in Salisbury itself, including one no longer existing at the ♦ Men’s, Ladies’ and Mixed Pairs

He was also more than active in charity work which was

in 1980, then being appointed an Officer of the Order.

He and Cecilia also found time to have six children following

like ‘Pick it up!’, ‘Now make a sensible bid!’ ‘Only eleven cards left’

and ‘I always like my ladies to go to bed on the same day they got up!’

gifts on behalf of the club to Cecilia and Phil, and everyone joined

Chicago Bridge at this most welcoming of Salisbury’s clubs. please contact

One founder club member explained why her husband never

learned to play bridge despite the excellent teaching that Phil

Phil asked me this evening? What cards did my opponents hold?

Now most members are able to answer this question reasonably