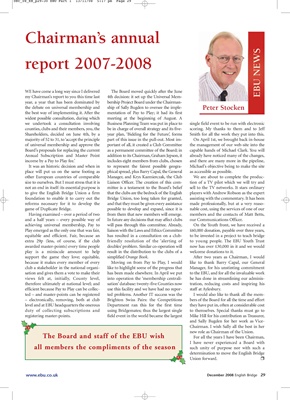 my Chairman’s report to you this time last 4th decision: it set up the Universal Mem-

year, a year that has been dominated by bership Project Board under the Chairman-

the best way of implementing it. After the mentation of Pay to Play; it had its first

widest possible consultation, during which meeting at the beginning of August. A

counties, clubs and their members, you, the be in charge of overall strategy and its five- scoring. My thanks to them and to Jeff

Shareholders, decided on June 4th, by a year plan, ‘Bidding for the Future’, forms Smith for all the work they put into this.

majority of 52 to 31, to ‘accept the principle part of this issue in the pull-out. Most im- On April 1st, we brought back in-house

of universal membership and approve the portant of all, it created a Club Committee the management of our web-site into the

Board’s proposals for replacing the current as a permanent committee of the Board; in capable hands of Michael Clark. You will

Annual Subscription and Master Point addition to its Chairman, Graham Jepson, it already have noticed many of the changes,

income by a Pay to Play fee.’ includes eight members from clubs, chosen and there are many more in the pipeline,

place will put us on the same footing as phical spread, plus Barry Capal, the General as accessible as possible.

other European countries of comparable Manager, and Krys Kazmierczak, the Club We are about to complete the produc-

size to ourselves. But I must stress that it is Liaison Officer. The creation of this com- tion of a TV pilot which we will try and

not an end in itself: its essential purpose is mittee is a testament to the Board’s belief sell to the TV networks. It stars ordinary

foundation to enable it to carry out the Bridge Union, too long taken for granted, assisting with the commentary. It has been

reforms necessary for it to develop the and that they must be given every assistance made professionally, but at a very reaso-

game of Duplicate Bridge. possible to develop and expand, since it is nable cost, using the services of one of our

Having examined – over a period of two from them that new members will emerge. members and the contacts of Matt Betts,

and a half years – every possible way of In future any decisions that may affect clubs our Communications Officer.

achieving universal membership, Pay to will pass through this committee. Already, On the Youth front, we have received a

Play emerged as the only one that was fair, liaison with the Laws and Ethics Committee £60,000 donation, payable over three years,

equitable and efficient. Fair, because an has resulted in a consultation on a club- to be invested in a project to teach bridge

extra 29p (less, of course, if the club friendly resolution of the ‘alerting of to young people. The EBU Youth Trust

awarded master-points) every time people doubles’ problem. Similar co-operation will now has over £30,000 in it and we would

play is a miniscule amount to help result in the distribution to the clubs of a welcome donations to it.

support the game they love; equitable, simplified Orange Book. After two years as Chairman, I would

because it makes every member of every Moving on from Pay to Play, I would like to thank Barry Capal, our General

club a stakeholder in the national organi- like to highlight some of the progress that Manager, for his unstinting commitment

sation and gives them a vote to make their has been made elsewhere. In April we put to the EBU, and for all the invaluable work

views felt at, initially, County level, into operation the ‘membership centrali- he has done in streamlining our adminis-

efficient because Pay to Play can be collec- use this facility and we have had no repor- staff at Aylesbury.

ted – and master-points can be registered ted problems. Another IT success was the I would also like to thank all the mem-

– electronically, removing, both at club Brighton Swiss Pairs: the Competitions bers of the Board for all the time and effort

level and at EBU headquarters the onerous Department ran this for the first time they have put in, often at considerable cost

duty of collecting subscriptions and using Bridgemates; thus the largest single to themselves. Special thanks must go to

registering master-points. field event in the world became the largest Mike Hill for his contribution as Treasurer,

and Sally Bugden for her work as Vice-

Chairman. I wish Sally all the best in her

new role as Chairman of the Union.

The Board and staff of the EBU wish For all the years I have been Chairman,

I have never experienced a Board with

determination to move the English Bridge