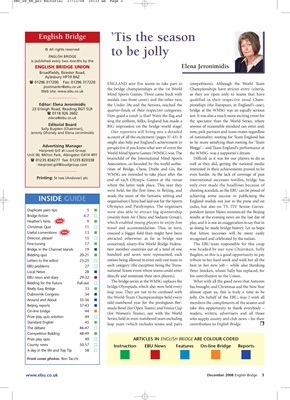 Mind Sports Games. Three came back with as they are open only to teams that have

medals (see front cover) and the other two, qualified in their respective zonal Cham-

Editor: Elena Jeronimidis the Under 28s and the Seniors, reached the pionships (the European, in England’s case),

23 Erleigh Road, Reading RG1 5LR quarter-finals of their respective categories. bridge at the WMSG was an equally serious

How good a result is that? Wave the flag and test. It was also a much more exciting event for

sing the anthem, folks, England has made a the spectator than the World Series, where

Editorial Board BIG impression on the bridge world stage! anyone of reasonable standard can enter and,

Jeremy Dhondy and Elena Jeronimidis Our reporters will bring you a detailed now, pick partners and team-mates regardless

World Mind Sports Games (WMSG) was. The the WMSG was a supporter’s dream.

Harpreet.gill@loudgroup.com Association, co-founded by the world autho- well as they did, getting the national media

WMSG are intended to take place after the even harder. As the lack of coverage of past

where the latter took place. This year they only ever made the headlines because of

were held, for the first time, in Beijing, and cheating scandals, so the EBU can be proud of

Olympics and Paralympics. The organisers radio, but also on TV. ITV Senior Corres-

Bridge fiction 6-7 (mainly from Air China and Sodium Group), results at the evening news on the last day of

Heather’s hints NEW 9 which enabled young players to enjoy free play, and it is not an exaggeration to say that in

Christmas Quiz 11 travel and accommodation. This, in turn, so doing he made bridge history. Let us hope

Director, please! 15 attracted otherwise: as far as bridge was recognised and celebrated by the nation.

Bridge in the Channel Islands 19 tion member countries out of a total of one was headed by our new Chairman, Sally

Bidding quiz 20-21 hundred and seven were represented, each Bugden, so this is a good opportunity to pay

Local News 28 national Teams event where teams could enter Peter Stocken, whom Sally has replaced, for

EBU news and diary 29-32 directly and nominate their own players). his contribution to the Union.

bridge Olympiads, which also were held every has brought, and Christmas and the New Year

leap year. They are not to be confused with almost upon us, this is truly a time to be

the World Team Championships held every jolly. On behalf of the EBU, may I wish all

(for Women’s Teams), nor with the World readers, writers, advertisers and all those

Series, held in even-numbered years excluding who supply county and club news – for their