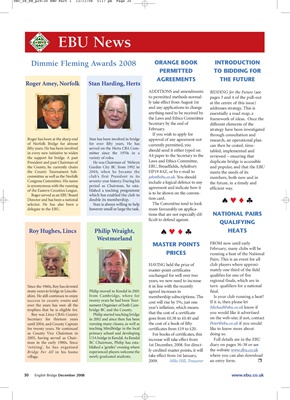 PERMITTED TO BIDDING FOR

ADDITIONS and amendments BIDDING for the Future (see

and any applications to change addresses strategy. This is

anything need to be received by essentially a road map, a

the Laws and Ethics Committee framework of ideas. Once the

Secretary by the end of different elements of the

February. strategy have been investigated

If you wish to apply for through consultation and

Roger has been at the sharp end Stan has been involved in bridge approval of any agreement not research, an operational plan

of Norfolk Bridge for almost for over fifty years. He has currently permitted, you can then be costed, time-

fifty years. He has been involved served on the Herts CBA Com-

should send it either typed on tabled, implemented and

the support for bridge. A past variety of roles. A4 paper to the Secretary to the reviewed – ensuring that

President and past Chairman of He was Chairman of Welwyn Laws and Ethics Committee, duplicate bridge is accessible

the County, he currently chairs Garden City BC from 1992 to EBU, Broadfields, Aylesbury and popular, and that the EBU

the County Tournament Sub- 2004, when he became the HP19 8AZ, or by e-mail to meets the needs of its

committee as well as the Norfolk club’s first President in its john@ebu.co.uk. You should members, both now and in

Congress Committee. His name seventy-year history. During his include a logical defence to any the future, in a timely and

is synonymous with the running period as Chairman, he esta-

agreement and indicate how it efficient way.

of the Eastern Counties League. blished a teaching programme

Director and has been a national

selector. He has also been a

Stan is always willing to help The Committee tend to look ♠♥♦♣

delegate to the EBU. however small or large the task. more favourably on applica-

tions that are not especially dif- NATIONAL PAIRS

ficult to defend against.

MASTER POINTS FROM now until early

February, many clubs will be

PRICES running a heat of the National

Pairs. This is an event for all

HAVING held the price of club players where approxi-

master-point certificates mately one third of the field

unchanged for well over two qualifies for one of five

years, we now need to increase regional finals, which are in

Since the 1960s, Roy has devoted it in line with the recently turn qualifiers for a national

many years to bridge in Lincoln- Philip moved to Kendal in 2001 agreed increases in final.

shire. He still continues to enjoy from Cambridge, where for membership subscriptions. The Is your club running a heat?

success in county events and twenty years he had been Tour- cost will rise by 5%, just one If it is, then please let

trophies that he is eligible for. bridge BC and the County.

until 2004, and County Captain running many classes, as well as the cost of a book of fifty Peter@ebu.co.uk if you would

for twenty years. He continued teaching MiniBridge in the local certificates from £19 to £20. like to know more about

as County Vice Chairman in primary school and developing For books of certificates, this doing so.

2005, having served as Chair- U3A bridge in Kendal. As Kendal increase will take effect from Full details are in the EBU

man in the early 1980s. Since BC Chairman, Philip has esta-

‘retiring’, he has organised blished a ‘gentler’ evening where

Bridge For All in his home experienced players welcome the ly credited master points, it will the website www.ebu.co.uk