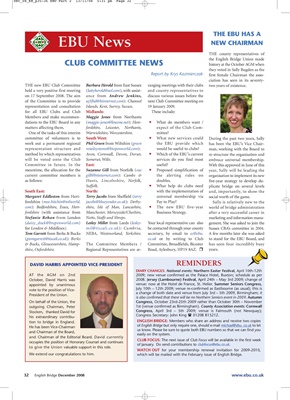 THE EBU HAS A

THE county representatives of

the English Bridge Union made

CLUB COMMITTEE NEWS history at the October AGM when

they voted in Sally Bugden as the

ciation has seen in its seventy-

held a very positive first meeting (lattyherold@aol.com), with assist- and county representatives to

on 17 September 2008. The aim ance from Andrew Jenkins, discuss various issues before the

of the Committee is to provide aj3fhd@btinternet.com): Channel next Club Committee meeting on

for all EBU Clubs and Club Midlands: These include:

dations to the EBU Board in any (maggie-jones@lineone.net): Here- • What do members want /

One of the tasks of this interim Warwickshire, Worcestershire. mittee?

committee of volunteers is to South West: • What new services could During the past two years, Sally

representation structure and retailsystems@btopenworld.com): would be useful to clubs? man, working with the Board to

method by which representatives Avon, Cornwall, Devon, Dorset, • Which of the EBU’s current re-structure the organisation and

will be voted onto the Club Somerset, Wilts. services do you find most embrace universal membership.

Committee in future. In the East: useful? With this approved in June of this

meantime, the allocation for the Suzanne Gill from Norfolk (sue • Proposed simplification of year, Sally will be leading the

current committee members is gill@btinternet.com): Cambs & the alerting rules on organisation to implement its new

South East: North: with the implementation of and, importantly, to show the

Margaret Eddleston from Hert- Terry Jacobs from Sheffield (terry universal membership via social worth of the game.

fordshire (with assistance from Manchester, Merseyside/Cheshire, Business Strategy. after a very successful career in

(daisy_duck@btopenworld.com) Lesley Millet from Leeds (lesley- Your local representative can also gement. She was asked to join the

for London & Middlesex). mil@tiscali.co.uk): Cumbria, be contacted through your county Sussex CBA’s committee in 2004.

Tom Garrett from Berks & Bucks NEBA, Westmorland, Yorkshire. secretary, by email to cc@ebu. A few months later she was asked

(gtomgarrett@tiscali.co.uk): Berks co.uk or by writing to Club to stand for the EBU Board, and

AT the AGM on 2nd 2009; new venue confirmed as the Palace Hotel, Buxton; schedule as per

President of the Union.

is also confirmed that there will be no Northern Seniors event in 2009. Autumn

tion to bridge in England. ENGLISH BRIDGE: Members who share an address and receive two copies

He has been Vice-Chairman of English Bridge but only require one, should e-mail michael@ebu. co.uk to let

us know. Please be sure to quote both EBU numbers so that we can find you

and Chairman of the Board,

easily on the system.

and Chairman of the Editorial Board. David currently

CLUB FOCUS: The next issue of Club Focus will be available in the first week

occupies the position of Honorary Counsel and continues

of January. Do send contributions to clubfocus@ebu.co.uk.

to give the Union valuable support in this role.

WATCH OUT for your membership renewal invitation for 2009-2010,

We extend our congratulations to him. which will be mailed with the February issue of English Bridge.