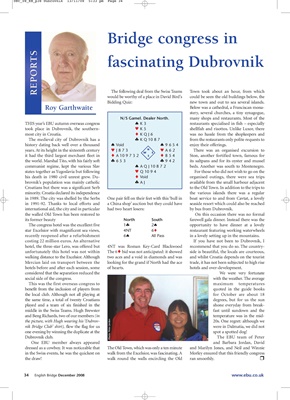 The following deal from the Swiss Teams Town took about an hour, from which

would be worthy of a place in David Bird’s could be seen the old buildings below, the

Bidding Quiz: new town and out to sea several islands.

Roy Garthwaite Below was a cathedral, a Franciscan mona-

N/S Gamel. Dealer North. many shops and restaurants. Most of the

took place in Dubrovnik, the southern- ♥K5 shellfish and risottos. Unlike Luxor, there

most city in Croatia. ♦KQJ6 was no hassle from the shopkeepers and

history dating back well over a thousand ♠ Void ♠9654 enjoy their offerings.

years. At its height in the sixteenth century ♥ J873 W

♥A62 There was an organised excursion to

the world. Marshal Tito, with his fairly soft ♣ 653 ♣942 its saltpans and for its oyster and mussel

communist regime, kept the various Slav ♠ A Q J 10 8 7 2 beds. Another was south to Montenegro.

Croatians but there was a significant Serb to the Old Town. In addition to the trips to

minority. Croatia declared its independence the various islands there was a regular

in 1989. The city was shelled by the Serbs One pair fell on their feet with this ‘bull in boat service to and from Cavtat, a lovely

in 1991-92. Thanks to local efforts and a China shop’ auction but they could have seaside resort which could also be reached

international aid, the city and in particular had two heart losers: by bus from Dubrovnik.

its former beauty North South farewell gala dinner. Instead there was the

recently reopened after a refurbishment 6♠ All Pass in a lovely setting up in the mountains.

costing 22 million euros. An alternative If you have not been to Dubrovnik, I

hotel, the three-star Lero, was offered but 4NT was Roman Key-Card Blackwood recommend that you do so. The country-

unfortunately this hotel was not within The 6♦ bid was not anticipated: it showed side is beautiful, the locals are courteous,

walking distance to the Excelsior. Although two aces and a void in diamonds and was and whilst Croatia depends on the tourist

Mercian laid on transport between the looking for the grand if North had the ace trade, it has not been subjected to high rise

hotels before and after each session, some of hearts. hotels and over-development.

considered that the separation reduced the We were very fortunate

social side of the congress. with the weather. The average

This was the first overseas congress to maximum temperatures

the local club. Although not all playing at for October are about 18

the same time, a total of twenty Croatians degrees, but for us the sun

middle in the Swiss Teams. Hugh Brewster fast until sundown and the

and Beng Richards, two of our members (in temperature was in the mid-

the picture, with Hugh wearing his ‘Dubrov- 20s. One regret: although we

nik Bridge Club’ shirt), flew the flag for us were in Dalmatia, we did not

one evening by winning the duplicate at the spot a spotted dog!

dressed as a cowboy. It was noticeable that The Old Town, which was only a ten minute and Marilyn Jones, and Neil and Winnie

in the Swiss events, he was the quickest on walk from the Excelsior, was fascinating. A Morley ensured that this friendly congress

the draw! walk round the walls encircling the Old ran smoothly.