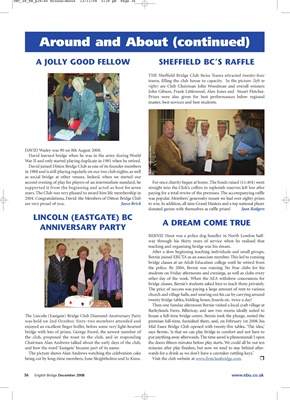 Around and About (continued)

teams, filling the club house to capacity. In the picture (left to

Prizes were also given for best performances below regional

David learned bridge when he was in the army during World

War II and only started playing duplicate in 1981 when he retired.

David joined Ditton Bridge Club as one of its founder members

in 1988 and is still playing regularly on our two club nights, as well

as social bridge at other venues. Indeed, when we started our

second evening of play for players of an intermediate standard, he For once charity began at home. The funds raised (£1,404) went

years. The Club was very pleased to award him life membership in paying for a total rewire of the premises. The accompanying raffle

2004. Congratulations, David: the Members of Ditton Bridge Club was popular. Members’ generosity meant we had over eighty prizes

are very proud of you. Joyce Brick to win. In addition, all nine Grand Masters and a top national player

donated games with themselves as raffle prizes! Jean Rodgers

BERNIE Hunt was a police dog handler in North London half-

way through his thirty years of service when he realised that

teaching and organising bridge was his dream.

After a slow beginning teaching individuals and small groups,

Bernie joined EBUTA as an associate member. This led to running

bridge classes at an Adult Education college until he retired from

the police. By 2006, Bernie was running No Fear clubs for his

students on Friday afternoons and evenings, as well as clubs every

other day of the week. When the AEA withdrew concessions for

bridge classes, Bernie’s students asked him to teach them privately.

church and village halls, and wearing out his car by carrying around

Then one Sunday afternoon Bernie visited a local craft village at

was held on 2nd October. Sixty-two members attended and premises full-time, furnished them, and, on February 1st 2008, his

bridge with lots of prizes. George Foord, the newest member of says Bernie, ‘is that we can play bridge in comfort and not have to

the club, proposed the toast to the club, and in responding put anything away afterwards. The time saved is phenomenal: I open

Chairman Alan Andrews talked about the early days of the club, the doors fifteen minutes before play starts. We could all be out ten

and how the word ‘Eastgate’ became part of its name. minutes after play finishes, but now we tend to stay behind after-

The picture shows Alan Andrews watching the celebration cake wards for a drink as we don’t have a caretaker rattling keys.’

being cut by long-time members, June Sleightholme and Jo Kime. Visit the club website at www.firstclassbridge.com.