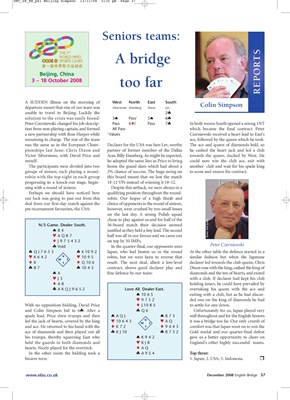 A SUDDEN illness on the morning of West North East South

unable to travel to Beijing. Luckily the 2♣

tion from non-playing captain, and formed All Pass which became the final contract. Peter

a new partnership with Ross Harper while 1

remaining in charge. The rest of the team ace, followed by the queen which he took.

was the same as in the European Cham- Declarer for the USA was Sam Lev, worthy The ace and queen of diamonds held, so

pionships last June: Chris Dixon and partner of former member of the Dallas he cashed the heart jack and led a club

Victor Silverstone, with David Price and Aces, Billy Eisenberg. As might be expected, towards the queen, ducked by West. He

myself. he adopted the same line as Price to bring could now win the club ace, exit with

groups of sixteen, each playing a round- 2% chance of success. The huge swing on to score and ensure his contract.

ning with a round of sixteen. Despite this setback, we were always in a

Perhaps we should have noticed how qualifying position throughout the round-

our luck was going to pan out from this robin. Our hopes of a high finish and

deal from our first-day match against the choice of opponents in the round of sixteen,

pre-tournament favourites, the USA: however, were crushed by two small losses

on the last day. A strong Polish squad

chose to play against us and for half of the

♠84 justified as they held a tiny lead. The second

♥AQ87 half was all in our favour and we came out

♣ Void In the quarter-final, our opponents were Peter Czerniewski

♥ 10 9 5 robin, but we were keen to reverse that similar fashion but when the Japanese

♦ K S ♦ Q 10 6 result. The next deal, albeit a low-level declarer led towards the club queen, Chris

♠A fine defence by our team: diamonds and the ten of hearts, and exited

♥J3 with a club. If declarer had kept his club

♦A8 holding intact, he could have prevailed by

♣AKQJ9652 Love All. Dealer East. overtaking his queen with the ace and

With no opposition bidding, David Price ♦ J 10 8 5 to settle for one down.

and Colin Simpson bid to 6♣. After a ♣Q6 Unfortunately for us, Japan played very

spade lead, Price drew trumps and then ♠ AQJ ♠873 well throughout and for the English Seniors

♥AQ it was a bridge too far. Our only crumb of

his trumps, thereby squeezing East who ♠K942 gave us a better opportunity to cheer on

held the guards in both diamonds and ♥KJ8 England’s other highly successful teams.

In the other room the bidding took a ♣A954 Top three: