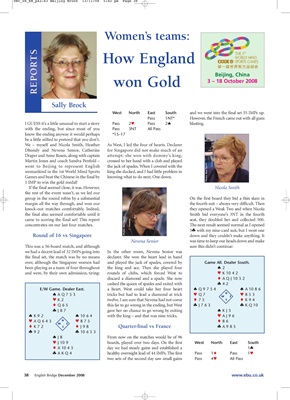 West North East South and we went into the final set 55 IMPs up.

Pass 1NT* However, the French came out with all guns

I GUESS it’s a little unusual to start a story Pass 2♥ Pass 2♠ blasting.

with the ending, but since most of you Pass 3NT All Pass

know the ending anyway it would perhaps *15–17

be a little stilted to pretend that you don’t.

We – myself and Nicola Smith, Heather As West, I led the four of hearts. Declarer

Dhondy and Nevena Senior, Catherine for Singapore did not make much of an

Draper and Anne Rosen, along with captain attempt: she won with dummy’s king,

went to Beijing to represent English the jack of spades. When I covered with the

womankind in the 1st World Mind Sports king she ducked, and I had little problem in

Games and beat the Chinese in the final by knowing what to do next. One down.

1 IMP to win the gold medal!

If the final seemed close, it was. However, Nicola Smith

the rest of the event wasn’t, as we led our

margin all the way through, and won our the fourth suit – always very difficult. Then

knock-out matches comfortably. Indeed, they opened a Weak Two and when Nicola

came to scoring the final set! This report seat, they doubled her and collected 500.

concentrates on our last four matches. The next result seemed normal as I opened

5♣ with my nine-card suit, but I went one

Round of 16 vs Singapore down and they couldn’t make anything. It

Nevena Senior was time to keep our heads down and make

This was a 56-board match, and although sure this didn’t continue:

we had a decent lead of 32 IMPs going into In the other room, Nevena Senior was

the final set, the match was by no means declarer. She won the heart lead in hand

over, although the Singapore women had and played the jack of spades, covered by Game All. Dealer South.

been playing as a team of four throughout the king and ace. Then she played four ♠2

and were, by their own admission, tiring: rounds of clubs, which forced West to ♥ K 10 4 2

cashed the queen of spades and exited with ♣42

♣J87 gave her no chance to go wrong by exiting ♠KJ3