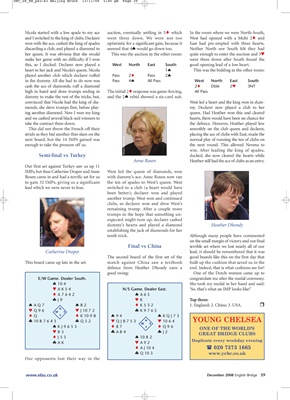 Nicola started with a low spade to my ace auction, eventually settling in 5♦ which In the room where we were North-South,

and I switched to the king of clubs. Declarer went three down. We were not too West had opened with a Multi 2♦ and

won with the ace, cashed the king of spades optimistic for a significant gain, because it East had pre-empted with three hearts.

discarding a club, and played a diamond to seemed that 4♠ would go down too. Neither North nor South felt they had

her queen. It was obvious that she would This was the auction in the other room: quite enough to enter the auction and 3♥

this, so I ducked. Declarer now played a West North East South good opening lead of a low heart.

heart to her jack and Nicola’s queen. Nicola 1♠ This was the bidding in the other room:

in the dummy. All she had to do now was Pass 4♠ All Pass West North East South

high in hand and draw trumps ending in The initial 2♦ response was game-forcing, All Pass

dummy to make the rest of the tricks, but, and the 2♠ rebid showed a six-card suit.

monds, she drew trumps first, before play- my. Declarer now played a club to her

ing another diamond. Now I won my king queen. Had Heather won this and cleared

and we cashed several black-suit winners to hearts, there would have been no chance for

take the contract three down. the defence. However, Heather played low

This did not throw the French off their smoothly on the club queen and declarer,

stride as they bid another thin slam on the placing the ace of clubs with East, made the

next board, but the 14 IMPs gained was normal play of running the ten of clubs on

enough to take the pressure off us. the next round. This allowed Nevena to

win. After leading the king of spades,

Semi-final vs Turkey ducked, she now cleared the hearts while

Anne Rosen Heather still had the ace of clubs as an entry.

Our first set against Turkey saw us up 11

IMPs, but then Catherine Draper and Anne West led the queen of diamonds, won

Rosen came in and had a terrific set for us with dummy’s ace. Anne Rosen now ran

to gain 32 IMPs, giving us a significant the ten of spades to West’s queen. West

lead which we were never to lose. switched to a club (a heart would have

been better); declarer won and played

another trump. West won and continued

remaining trump. After a couple more

trumps in the hope that something un-

establishing the jack of diamonds for her

tenth trick. Although many people have commented

on the small margin of victory and our final

Catherine Draper lead, it should be remembered that it was

This board came up late in the set: match against China saw a textbook built up the cushion that saved us in the

defence from Heather Dhondy earn a end. Indeed, that is what cushions are for!

good swing: One of the Dutch women came up to

E/W Game. Dealer South. congratulate me after the medal ceremony.

Our opponents lost their way in the