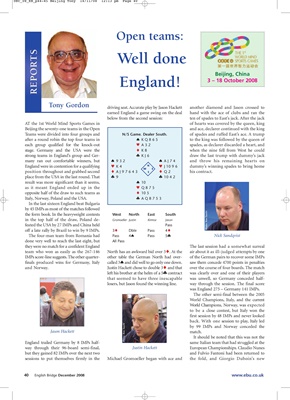 below from the second session: ten of spades to East’s jack. After the jack

AT the 1st World Mind Sports Games in of hearts was covered by the queen, king

Beijing the seventy-one teams in the Open and ace, declarer continued with the king

Teams were divided into four groups and N/S Game. Dealer South. of spades and ruffed East’s ace. A trump

each group qualified for the knock-out ♥ A32 spades, as declarer discarded a heart, and

stage. Germany and the USA were the ♦ K8 when the nine fell from West he could

many ran out comfortable winners, but ♠ 932 ♠ AJ74 and throw his remaining hearts on

England were in contention for a qualifying ♥ K4

position throughout and grabbed second ♦ AJ97643 S ♦ Q2 his contract.

result was more significant than it seems, ♠ 10

by 45 IMPs as most of the matches followed

in the top half of the draw, Poland de- Gromoeller Justin Kirmse Jason

feated the USA by 27 IMPs and China held Pass

done very well to reach the last eight, but All Pass

team who won as easily as the 267-146 North has an awkward bid over 3♦. At the air about it as ill-judged attempts by one

IMPs score-line suggests. The other quarter- other table the German North had over- of the German pairs to recover some IMPs

finals produced wins for Germany, Italy called 3♠ and did well to go only one down. saw them concede 4700 points in penalties

and Norway. Justin Hackett chose to double 3♦ and that over the course of four boards. The match

that seemed to have three inescapable was unwell, so Germany conceded half-

losers, but Jason found the winning line. way through the session. The final score

The other semi-final between the 2005

World Champions, Italy, and the current

to be a close contest, but Italy won the

back. With one session to play, Italy led

by 99 IMPs and Norway conceded the

It should be noted that this was not the

sessions to put themselves firmly in the Michael Gromoeller began with ace and the fold, and Giorgio Duboin’s new