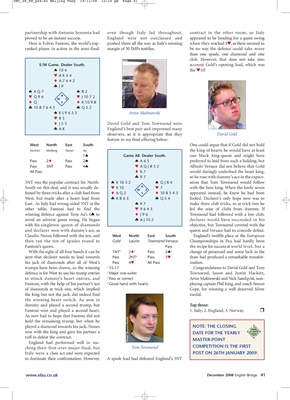 partnership with Antonio Sementa had even though Italy led throughout, contract in the other room, so Italy

proved to be an instant success. England were not outclassed and appeared to be heading for a game swing

Here is Fulvio Fantoni, the world’s top- pushed them all the way as Italy’s winning when they reached 4♥, as there seemed to

ranked player, in action in the semi-final: margin of 30 IMPs testifies. be no way the defence could take more

than one spade, one diamond and one

club. However, that does not take into

observers, so it is appropriate that they David Gold

feature in my final offering below:

1♠ Game All. Dealer South. one black king-queen and might have

All Pass ♦ K7 would daringly underlead the heart king,

♥7 with the bare king. When the lowly seven

East. As Italy had wrong-sided 3NT at the ♠ 97 make three club tricks, so at trick two he

other table, Fantoni had to find the ♥ 9643 led the nine of clubs from dummy. If

winning defence against Terje Aa’s 4♠ to ♦ J96 Townsend had followed with a low club,

avoid an adverse game swing. He began ♣ A J 10 2 declarer would have succeeded in his

with his singleton queen of diamonds objective, but Townsend covered with the

and declarer won with dummy’s ace, as queen and Versace had to concede defeat.

Fantoni’s queen. Pass the recipe for success at world level, but a

his jack of diamonds after all of West’s Pass 4♥ All Pass mation.

trumps have been drawn, so the winning 1

15-17 Congratulations to David Gold and Tom

defence is for West to use his trump entries 2

to attack dummy’s heart entries, and 3

Fantoni, with the help of his partner’s ten 4

of diamonds at trick one, which implied Cope, for winning a well deserved Silver

the king but not the jack, did indeed find medal.

dummy and played a second trump, but Top three:

Aa now had to hope that Fantoni did not

hold the remaining trump, but when he

played a diamond towards his jack, Nunes NOTE: THE CLOSING

ruff to defeat the contract.

England had performed well in rea-

ching their first-ever major final, but Tom Townsend COMPETITION IS THE FIRST

Italy were a class act and were expected POST ON 26TH JANUARY 2009.

to dominate their confrontation. However, A spade lead had defeated England’s 3NT