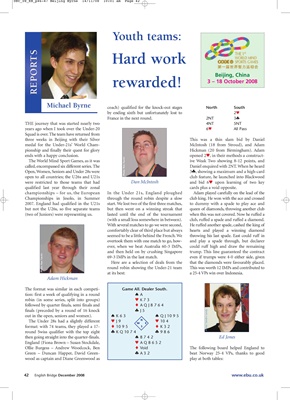 by ending sixth but unfortunately lost to 2♥

THE journey that was started nearly two 4NT 5NT

Squad is over. The team have returned from

medal for the Under-21s’ World Cham- McIntosh (18 from Stroud), and Adam

pionship and finally their quest for glory Hickman (20 from Birmingham). Adam

ends with a happy conclusion. opened 2♥, in their methods a construct-

The World Mind Sport Games, as it was ive Weak Two showing 8-12 points, and

called, encompassed six different series. The Daniel enquired with 2NT. When he heard

Open, Women, Seniors and Under 28s were 3♣, showing a maximum and a high-card

open to all countries; the U26s and U21s club feature, he launched into Blackwood

qualified last year through their zonal cards plus a void opposite.

championships – for us, the European In the Under 21s, England ploughed Adam played carefully on the lead of the

Championships in Jesolo, in Summer through the round robin despite a slow club king. He won with the ace and crossed

2007. England had qualified in the U21s start. We lost two of the first three matches, to dummy with a spade to play ace and

but not the U26s, so five separate teams but then went on a winning streak that queen of diamonds, throwing another club

(two of Juniors) were representing us. lasted until the end of the tournament when this was not covered. Now he ruffed a

(with a small loss somewhere in between). club, ruffed a spade and ruffed a diamond.

With several matches to go we were second, He ruffed another spade, cashed the king of

seemed to be a little behind the French. We throwing his last spade. East could ruff in

overtook them with one match to go, how- and play a spade through, but declarer

ever, when we beat Australia 60-3 IMPs, could ruff high and draw the remaining

and then held on by crushing Singapore trump. This line guaranteed the contract

Here are a selection of deals from the that the diamonds were favourably placed.

The format was similar in each competi- Game All. Dealer South.

tion: first a week of qualifying in a round ♠A

robin (in some series, split into groups) ♥K73

The Under 28s had a slightly different ♥ J9 W E

then going straight into the quarter-finals. ♠8742 Ed Jones

wood as captain and Diane Greenwood as play at both tables: