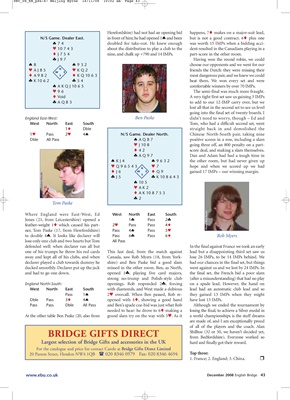 Herefordshire) had not had an opening bid happens, 7♦ makes on a major-suit lead,

N/S Game. Dealer East. in front of him; he had opened 1♠ and been but is not a good contract. 6♦ plus one

♠74 doubled for take-out. He knew enough was worth 15 IMPs when a bidding acci-

♣J97 Having won the round robin, we could

♥KQ2 friends the Dutch: they were missing their

♥96 The semi-final was much more fraught.

lost all that in the second set to see us level

going into the final set of twenty boards. I

1♦ Dble straight back in and demolished the

Dble All Pass ♠AQ87 positive scores in a row, including a slam

♦42 score deal, and making a slam themselves.

♣AQ97 Dan and Adam had had a tough time in

to double 4♠. It looks like declarer will Pass 6♣ Pass 6♦ Rob Myers

lose only one club and two hearts but Tom All Pass

defended well: when declarer ran all but In the final against France we took an early

one of his trumps he threw his red cards This last deal, from the match against lead but a disappointing third set saw us

declarer played a club towards dummy he shire) and Ben Paske bid a good slam had our chances in the final set, but things

ducked smoothly. Declarer put up the jack missed in the other room. Ben, as North, went against us and we lost by 24 IMPs. In

and had to go one down. opened 1♣, playing five card majors, the final set, the French bid a poor slam

England North-South: openings. Rob responded 2♣, forcing on a spade lead. However, the hand on

West North East South with diamonds, and West made a dubious lead had an automatic club lead and so

Pass 1♠ 2♥ overcall. When Ben passed, Rob re- they gained 13 IMPs when they might

needed to hear: he drove to 6♦ making a losing the final, to achieve a Silver medal in

At the other table Ben Paske (20, also from grand slam try on the way with 5♥. As it a world championships is the stuff dreams

are made of, and I am exceptionally proud

of all of the players and the coach. Alan

BRIDGE GIFTS DIRECT Shilltoe (32 or 50, we haven’t decided yet,

from Bedfordshire). Everyone worked so

Largest selection of Bridge Gifts and accessories in the UK hard and finally got their reward.