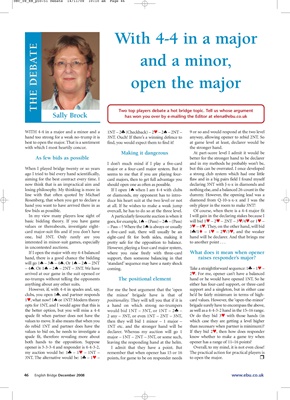 Sally Brock has won you over by e-mailing the Editor at elena@ebu.co.uk

hand too strong for a weak no-trump it is 3NT. Ouch! If there’s a winning defence to anyway, allowing opener to rebid 2NT. So

best to open the major. That is a sentiment find, you would expect them to find it! at game level at least, declarer would be

with which I most heartily concur. the stronger hand.

I don’t much mind if I play a five-card and in my methods he probably won’t be,

When I played bridge twenty or so years major or a four-card major system. But it but this can be overrated. I once developed

ago I tried to bid every hand scientifically, seems to me that if you are playing four- a strong club system which had one little

aiming for the best contract every time. I card majors, then to get full advantage you flaw and in a big pairs field I found myself

now think that is an impractical aim and should open one as often as possible. declaring 3NT with J-x-x in diamonds and

losing philosophy. My thinking is more in If I open 1♠ when I am 4-4 with clubs nothing else, and a balanced 26-count in the

line with that often quoted by Michael or diamonds, my opponent has to intro- dummy. However, the opening lead was a

Rosenberg, that when you get to declare a duce his heart suit at the two level or not diamond from Q-10-x-x-x and I was the

hand you want to have arrived there in as at all. If he wishes to make a weak jump only player in the room to make 3NT!

few bids as possible. overcall, he has to do so at the three level. Of course, when there is a 4-4 major fit

one, bid 3NT. Only rarely are you eight-card fit for both sides, making it hand will be declarer. And that brings me

interested in minor-suit games, especially pretty safe for the opposition to balance. to another point . . .

in uncontested auctions. However, playing a four-card major system,

hand, there is a good chance the bidding support, then someone balancing in that raises responder’s major?

arrived at our game in the suit opened or 2♥. For me, opener can’t have a balanced

no-trumps without telling the opponents The positional element hand or he would have opened 1NT. So he

anything about any other suits. either has four-card support, or three-card

However, if, with 4-4 in spades and, say, For me the best argument that the ‘open support and a singleton, but in either case

clubs, you open 1♣, and partner responds the minor’ brigade have is that of he’d be fairly minimum in terms of high-

1♥, what now? 1♠ or 1NT? Modern theory positionality. They will tell you that if it is card values. However, the ‘open-the-minor’

opts for 1NT, and I would agree that this is a hand on which strong no-trumpers brigade surely have to encompass the above,

values to move. It also means that when you then they will bid 1 minor – 1 major – which case they are getting a level higher

do rebid 1NT and partner does have the 1NT etc. and the stronger hand will be than necessary when partner is minimum)?

values to bid on, he needs to investigate a declarer. Whereas my auction will go 1 If they bid 2♥, then how does responder

spade fit, therefore revealing more about major – 1NT – 2NT – 3NT, or some such, know whether to make a game try when

both hands to the opposition. Suppose leaving the responding hand at the helm. opener has a range of 11–16 points?