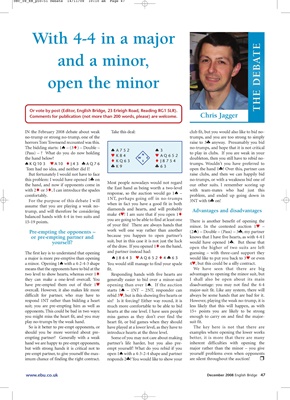 Comments for publication (not more than 200 words, please) are welcome. Chris Jagger

IN the February 2008 debate about weak Take this deal: club fit, but you would also like to bid no-

no-trump or strong no-trump, one of the trumps, and you are too strong to simply

horrors Tom Townsend recounted was this. raise to 3♣ anyway. Presumably you bid

(Pass) – ? What do you do now holding N to play in clubs. If you are weak in your

the hand below? W E doubleton, then you still have to rebid no-

Tom had no idea, and neither did I! open the hand 1♣? Over this, partner can

But fortunately I would not have to face raise clubs, and then we can happily bid

this problem: I would have opened 1♣ on no-trumps, or with a weakness bid one of

Most people nowadays would not regard our other suits. I remember scoring up

the hand, and now if opponents come in

the East hand as being worth a two-level

with 2♦ or 3♦, I can introduce the spades with team-mates who had just this

response, so the auction would go 1♠ – problem, and ended up going down in

For the purpose of this debate I will

when in fact you have a good fit in both

assume that you are playing a weak no-

diamonds and hearts, and will probably Advantages and disadvantages

trump, and will therefore be considering

balanced hands with 4-4 in two suits and

of your fits! There are always hands that minor. In the contested auction 1♥ –

or pre-empting partner and because you happen to open partner’s knows that I have five hearts, as with 4-4 I

yourself? suit, but in this case it is not just the luck would have opened 1♣. But those that

of the draw. If you opened 1♦ on the hand, open the higher of two suits are left

The first key is to understand that opening and partner instead had: guessing – with three-card support they

means that the opponents have to bid at the fit. We have seen that there are big

two level to show hearts, whereas over 1♦ Responding hands with five hearts are advantages to opening the minor suit, but

they can make a one-level overcall. You generally easier to bid over a minor-suit I shall also be open about its main

have pre-empted them out of their 1♥ opening than over 1 ♠ . If the auction disadvantage: you may not find the 4-4

overcall. However, it also makes life more starts 1♠ – 1NT – 2NT, responder can major-suit fit. Like any system, there will

difficult for partner, who may have to rebid 3♥, but is this showing five hearts or always be some hands that are bad for it.

respond 1NT rather than bidding a heart six? Is it forcing? Either way round, it is However, playing the weak no-trump, it is

suit; you are pre-empting him as well as much more comfortable to be able to bid less likely that this will happen, as with

opponents. This could be bad in two ways: hearts at the one level. I have seen people 15+ points you are likely to be strong

you might miss the heart fit, and you may miss games as they don’t ever find the enough to carry on and find the major-

play no-trumps by the weak hand. heart fit, or bid games when they should suit fit.

So is it better to pre-empt opponents, or have played at a lower level, as they have to The key here is not that there are

should you be more worried about pre- introduce hearts at the three level. examples where opening the lower works

empting partner? Generally with a weak Some of you may not care about making better, it is more that there are many

hand we are happy to pre-empt opponents, partner’s life harder, but you also pre- inherent difficulties with opening the

but with strong hands it is critical not to empt yourself! What do you rebid if you major rather than the minor – you give

pre-empt partner, to give yourself the max- open 1♠ with a 4-3-2-4 shape and partner yourself problems even when opponents

imum chance of finding the right contract. responds 2♣? You would like to show your are silent throughout the auction!