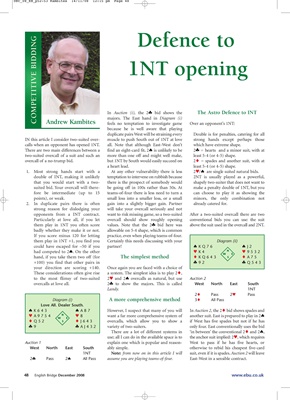 In Auction (i), the 2♣ bid shows the The Astro Defence to INT

majors. The East hand in Diagram (i)

Andrew Kambites feels no temptation to investigate game Over an opponent’s 1NT:

because he is well aware that playing

duplicate pairs West will be straining every Double is for penalties, catering for all

calls when an opponent has opened 1NT. all. Note that although East-West don’t which have extreme shape.

There are two main differences between a find an eight-card fit, 2♠ is unlikely to be 2♣ = hearts and a minor suit, with at

two-suited overcall of a suit and such an more than one off and might well make, least 5-4 (or 4-5) shape.

overcall of a no-trump bid. but 1NT by South would easily succeed on 2♦ = spades and another suit, with at

1. Most strong hands start with a At any other vulnerability there is less 2♥/♠ are single suited natural bids.

double of INT, making it unlikely temptation to intervene on rubbish because 2NT is usually played as a powerful,

suited bid. Your overcall will there- be going off in 100s rather than 50s. At make a penalty double of 1NT, but you

points), or weak. small loss into a smaller loss, or a small minors, the only combination not

2. In duplicate pairs there is often gain into a slightly bigger gain. Partner already catered for.

opponents from a INT contract. want to risk missing game, so a two-suited After a two-suited overcall there are two

Particularly at love all, if you let overcall should show roughly opening conventional bids you can use: the suit

them play in 1NT you often score values. Note that the 2♣ bid here was above the suit used in the overcall and 2NT.

badly whether they make it or not. allowable on 5-4 shape, which is common

If you score minus 120 for letting practice, even when playing teams-of-four.

them play in 1NT +1, you find you Certainly this needs discussing with your Diagram (ii)

your direction are scoring +140. Once again you are faced with a choice of

These considerations often give rise a system. The simplest idea is to play 2♦,

to the most flimsy of two-suited 2♥ and 2♠ overcalls as natural, but use Auction 2

overcalls at love all. 2♣ to show the majors. This is called West North East South

Diagram (i) A more comprehensive method 3♦ All Pass

♥8 want a far more comprehensive system of another suit. East is prepared to play in 2♠

There are a lot of different systems in ‘in between’ the conventional 2♦ and 2♠,

use; all I can do in the available space is to the anchor suit implied: 2♥, which requires

Auction 1 explain one which is popular and reason- West to pass if he has five hearts, or

1NT Note: from now on in this article I will suit, even if it is spades. Auction 2 will leave

2♣ Pass 2♠ All Pass assume you are playing teams-of-four. East-West in a sensible contract.