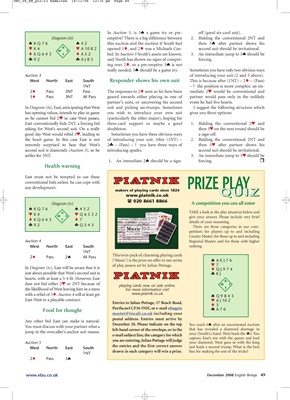 Diagram (iii) emptive? There is a big difference between 2. Bidding the conventional 2NT and

really needed. 3♠ should be a game try. Sometimes you have only two obvious ways

Auction 3 of introducing your suit (2 and 3 above).

partner’s suits, or uncovering his second event he had five hearts.

In Diagram (iii), East, anticipating that West suit and picking no-trumps. Sometimes I suggest the following structure which

has opening values, intends to play in game you wish to introduce your own suit gives you three options:

so he cannot bid 2♥ in case West passes. (particularly the other major), hoping for

asking for West’s second suit. On a really doubleton. then 3♥ on the next round should be

good day West would rebid 3♥, leading to Sometimes you have three obvious ways a sign-off.

the heart game. In this case East is not of introducing your suit. After (1NT) – 2. Bidding the conventional 2NT and

remotely surprised to hear that West’s 2♣ – (Pass) – ? you have three ways of then 3♥ after partner shows his

second suit is diamonds (Auction 3), so he introducing spades. second suit should be invitational.

East must not be tempted to use these

conventional bids unless he can cope with

N TAKE a look at the play situation below and

give your answer. Please include very brief

petition: for players up to and including

County Master; for those up to and including

Auction 4 Regional Master; and for those with higher

just about possible that West’s second suit is ♣ KJ

dare not bid either 2♥ or 2NT because of playing cards now on sale online. W E

with a rebid of 3♦. Auction 4 will at least get www.piatnik.co.uk

postal address. Entries must arrive by

Any other bid East can make is natural.

December 20. Please indicate on the top You reach 6♠ after an uncontested auction

You must discuss with your partner what a

left-hand corner of the envelope, or in the that has revealed a diamond shortage in

jump in the overcaller’s anchor suit means. your (South’s) hand. West leads the ♠2. You

e-mail subject line, the category for which

capture East’s ten with the queen and lead

you are entering. Julian Pottage will judge your diamond. West goes in with the king

the entries and the first correct answer and leads a second trump. What is the best

drawn in each category will win a prize. line for making the rest of the tricks?