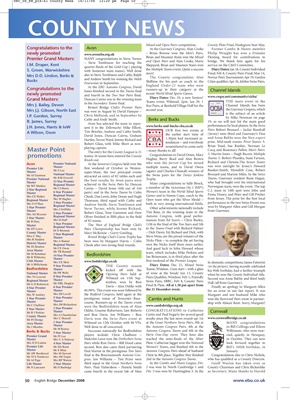 and Open Pairs and Alan Cooke, Maris bridge. We thank him again for his

– Steve Tomlinson for reaching the

and Andrew Smith for winning the Welsh

Bucks Shillitoe for his part as coach to the Cities qualifier; Apr 26, Jubilee Swiss Pairs.

At the EBU Autumn Congress, David England Under-21 team who were

Grand Masters: Duncan Cairns was in the winning team

in the Secondary Teams final.

Mrs J. Bailey, Devon Star Pairs, at Renhold Village Hall for the Channel Islands has been

was won in August by David Hamper –

is the subject of an article

I.P. Gordon, Surrey Chris Melluish, and in September by

by Mike Newman on page

Cathy and Andy Smith. Berks and Bucks 19, so we will just list the main good

Avon has selected the team to repre-

sent it in the Tollemache: Mike Elliott,

1.30pm had increased at- and Anne Babbe won the Non-expert

Master Point The entry for the County Leagues is 21 – many thanks to all! Cocq and Rosemary Pallot; Men’s Pairs:

Avon At the Somerset Congress held over the

Master multiple teams, and to David Owen was won outright by Jersey’s Howard

Mr AI Gammon National Master the Swiss pairs for the Denys Jenkins Brouard and Marion Miles. In the Swiss

Mr KM Goswell attracted an entry of 82 tables each and

12 Star Premier the best results by Avon pairs were

Master Many congratulations to Sally Brock, who had brought over his international

a member of the victorious (by 1 IMP!) Norwegian team, won the event. The top

Master pairs) and in the Swiss Teams by Colin

Regional Master Games and to Simon Cope, coach to the Fiona Honey, and Peter and Gill Pitcher

Regional Master Mrs M Hughes Open team who got the Silver Medal – from Jersey. The prize for the best local

Thomson, third equal with Cathy and

Master Tim Rees, in the winning team in the from Guernsey.

Regional Master in the Teams Final with Richard Palmer

Pairs Championship has been won by

Miss C May Bristol Bridge Club’s Curtis Trophy has Steve Moss, are the proud winners of the

Mrs R Staddon Nicko Plate – to complete the set having

Mrs A Banner been won by Margaret Harris – Colin

Mr CE Owen And good luck to John Howard whose

14 Star Premier Ian Reissmann, is in third place after the

9 Star Premier THE County season (in the picture), having recently celebrated

Bedfordshire Master kicked off with the Teams, Windsor, 11am start – with a glass his 90th birthday, had a further triumph

National Master Mr PR Wells Opening Pairs held at of wine at the break! Jan 11, County when he won the County Individual title.

Master Master 60.98%. This event was soon followed by the 21 December event. for an error in our last report. It was

Mrs W Audsley Mrs IM Lovell the Bedford Congress, held again at the Margaret and not husband Mike who

Cambs and Hunts won the Restricted Pairs event in partner-

were the Bedfordshire team of Alan

Area Master 1 Star Premier Wilstead on 12th October with 96 VPs. at the Great Northern Swiss Pairs, 9th at MANY congratulations

Master Well done to all concerned. the Autumn Congress Pairs, 4th at the to Bill Collings and Eileen

Berks & Bucks Successes nationally for Bedfordshire Autumn Congress Teams and 6th in the Wilkinson, who were mar-

Master Mrs U A Sidaway Malcolm Lunn won the Derbyshire Swiss reached the semi-finals of the Silver in October. They can now

final at the Bournemouth Autumn Con- Chris in 8th place. Together they finished Congratulations also to Chris Nichols,

Life Master 3 Star Master third equal in the Great Northern Swiss In the Cambs and Hunts League, Div. Geoff Warren has taken over as

came fourth in the recent Isle of Man Div. 3 was won by Huntingdon 3. In the as Secretary. Many thanks to Harold