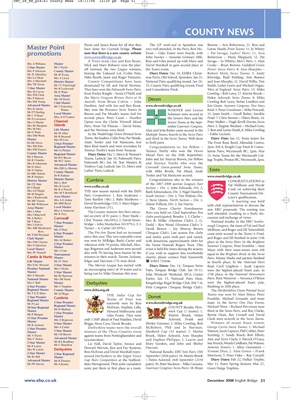 Payne and Janice Keast for all that they The GP week-end at Spondon was Browse – Avis Robertson, 21. Ron and

promotions note that there is a new county website

Ewan – Giles Foster were fourth, with

Alan and Jette Bailey came second in the

Mixed Pairs on the 20th September; 15, Swiss Teams for the Weymouth Col-

Mr B A Powell

with club representatives to discuss the

Miss A Anderson new EBU proposals. The evening was

Mrs I Bakewell Mr B Troy well attended, resulting in a lively dis-

Ross The Pro-Am Teams had an increased

Master entry this year. This very enjoyable event and ninety pairs took part and raised, and Roger and Jill finished in joint 11th

Mrs AJ Barker was won by Millidge, Baelz, Carter and with donations, approximately £840 for

Mrs GM Clayton place in the Swiss Pairs. In the Brighton

Local Master sop, Rogerson and Anderson were second event is held five times during the season; Mayo with their team-mates were 6th

Tournament also with 79, having been beaten by the if you wish to support this worthwhile equal in the Brighton Bowl; in the Swiss

2 Star Master being run by Mike Dunstan this year.

THE India Cup for

13 Star Premier only 1 IMP ahead of Paul Madden, David Ackroyd, Frank and Clark were seventh in the Swiss Teams.

Ms V Flawn against teams from Nottinghamshire and

Leicestershire. and Daphne Philipps; 2. Laurie and