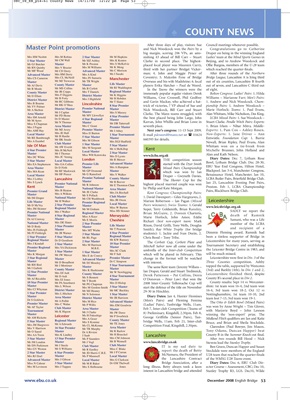 big margin, scoring 206 VPs, an asto- Draper on being in the winning England

placed local player was Maureen Curry, Ollie Burgess, members of the U-28 team

Advanced Master Mrs HM Derry Mrs A Kind Ms I Sasaki man; 4. John and Maggie Pyner of After three rounds of the Northern

In the Teams the winners were the of eight.

The Hunter Cup for the

2 Star Premier member of the LCBA

Master Mrs SC Clark umbrella of the Inter-club Competition the Leicester Bridge Centre in 1983, and

Mr F Salt which will be played in February. This will be much missed.

3 Star Regional Master Advanced Master Premier Master change in the format will be watched Leicestershire were first in Div. 3 of the

winning the ‘non-expert’ prize. The

Mr AM Ricketts Mrs A Geser

report the death of Betty Stockdale were members of the England