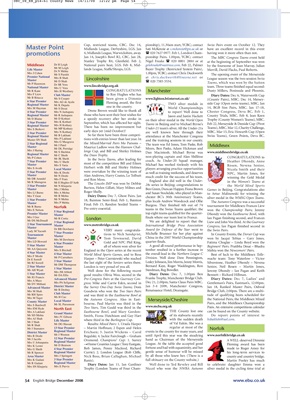 Master Point Midlands League, Derbyshire, LGS. Jan Sati McKenzie at s.mckenzie@gre.ac.uk or have an excellent record in this event

having won it more often than not.

Premier National Mrs B Shah at chris.duckworth@lineone.net or

League season was the two-session Swiss

Mr P Hasenson Teams, which was won by the Sutton

4 Star Premier Mrs N Jashapara Drene Brown would like to thank all to report! Well done to Chester Congress, Deva BC. Feb 1,

on their silver medal in the World Open

There has been no improvement but Under-21 team’s silver. All the Under-21s Teams), MBC. Mar 12, Charity Challenge,

Regional Master Mr B Lakhani So far there have been three competi- attendance at the Manchester Congress Swiss Teams), Green Points, Deva BC.

and the training sessions in our county.

Mr JK Sheth In the Swiss Teams, after leading for

5 Star Premier Mrs K Doshi were overtaken by the winning team of as well as training weekends, and deserves

and Ron Moss. England also did well in the Under-

The Lincoln IMP was won by Debbie 28s series in Beijing; congratulations to

Mrs LJ Burns Mrs A Mehta Roger Shelly. and Susan Stockdale, who played in Man- to Artur Malinowski for winning the

Master Mrs P Mehta The Autumn Congress was a successful

Mr DS McDouall We are delighted to report that the

3 Star Regional Liew and John Vos third. At the Guernsey

Dr BB Dewhurst VERY many congratula- Award for Defence of the Year went to the Swiss Pairs.

7 Star Premier Michelle Brunner for her play against

tions to Nick Sandqvist, In County Events, the Dorset Cup was

5 Star Master Master all of whom won silver for A good all-round performance in Sep- Beginners’ Pairs. Pratibha Desai – Bhadra

England in the Open series at the recent Mehta won the Newcomers’ Pairs.

World Mind Sports Games, and to Ross Best of luck to the Middlesex Tolle-

Mr B Drobny Renaissance Hotel, Deansgate. Bridge Club, 2:00pm. There are a multi-

Mrs A Lakhani Eastbourne Bowl, and Mary Gordon- THE County lost one can be found on the County website.

Mrs JV Gibson Smith, Fiona Hutchison and Guy Hart of its stalwarts recently Do report points of interest to

Life Master where third in the Burlington Cup.

Mr J Stamatov 13 Star Premier – Martin Hoffman; 2 Espen and Helen regular at most of the Norfolk

District Master Regional Master Erichsen; 3. Justin Wickens – Carol events in the county for many years, and

Mrs U Jobanputra League. At the table she accepted good

Mrs G Sheth 4 Star Premier Bob James, Penny Macleod, Richard fortune and bad with equanimity, and her made to Roger Amey for

Area Master Mrs J Springett Nick Boss, Brian Callaghan, Michael by all those who knew her. (There is a county and country bridge.