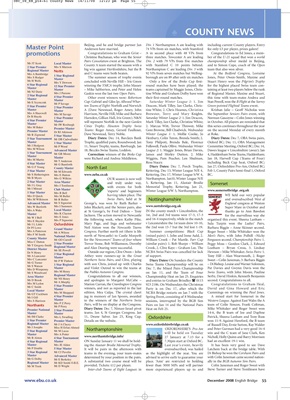 Beijing, and he and bridge partner Jan Div. 1 Northampton A are leading with including current County players. Entry

Christine Buchanan, who won the Senior

A in second place with 48 VPs from

three matches. Towcester A are leading

Congratulations to Ed Jones, a mem-

ber of the U-21 squad that won a world

County A team started the season with a with Stamford C 10 points behind. and to Simon Cope, coach of the Open

Regional Master big win against Hertfordshire, but the B Northampton C are leading Div. 3 with team that also won silver.

Mrs A Bainbridge and C teams were both beaten. 92 VPs from seven matches but Welling- At the Bedford Congress, Lorraine

The summer season of trophy events borough are on 89 after only six matches Jones, Peter Owen-Smith, Maxine and

6 Star Regional winning the YMCA trophy. John Massey round matches have been played; the for the highest placed Swiss team con-

Master Other event winners were: Robertson their first-round matches. this time with team-mates Andrea and

will represent Norfolk in the next Garden Mark Tilley, Ian Clarke, Christine White; in October. All players are reminded that

with events for both Memorial Trophy, Kettering. Jan 21,

Mrs A Wake Local Master at St George’s, by Fred Dalton – Tony IN the county match v Lincolnshire, the thanks go to Ann Bawdon

Mrs P Signorini the following week, when Kathy Pike, and 16-4 respectively, while in the match organised this event. Sheena Lanham –

1 Star Regional Swiss Teams Championship will be on

Master and Violet Outred to win the teams at Dec 7, the Mixed Pairs Championship Pat Davies and Gwynn Davis won the

and apologies to Margaret McCabe – and entries to Graham Brindley 0115 second. Congratulations to all.

Master winners, and not as reported in the last Party is on Dec 17, after which the David and Gina Howard and Eric

Mr I Gill 4 Star Premier jug in memory of Ian Spoors, awarded Spring Event, consisting of 8 Wednesday A mixed start for Somerset in the

Mrs S Harrison Master to the winners of the Northern Swiss sessions, interrupted by the BGB Sim Western League. Against East Wales the A

Mrs P Z Perry Pairs, will be on display at the Congress.

1 Star Premier Premier Master Details on the website. won 11-9. Against Hereford, the B team

Master Mrs A Potter will be held on Tuesday win and the C team of Jane Clark, Ken

www.northantsbridge.info/ 27 January at 7.15 for a Nicholl, Holly Quinn and Barry Morrison

Mr P Double 5 Star Master It will be pairs in the afternoon with oversubscribed, was hailed Latchem back at the bridge table. With

3 Star Regional Mr CJ Pavelin teams in the evening, your team-mates as the highlight of the year. You are Di Bishop he won the Corsham Pairs and

determined by your position in the pairs. advised to arrive early to guarantee your with Colin Juneman came second nation-

Inter-club Teams of Eight Leagues: in more experienced players up to and Steve Turner and Steve Tomlinson have