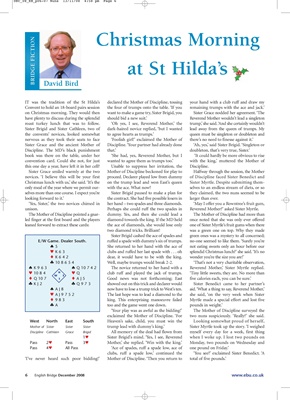 IT was the tradition of the St Hilda’s declared the Mother of Discipline, tossing your hand with a club ruff and draw my

Convent to hold an 18-board pairs session the four of trumps onto the table. ‘If you remaining trumps with the ace and jack.’

on Christmas morning. They would then want to make a game try, Sister Brigid, you Sister Grace nodded her agreement. ‘The

have plenty to discuss during the splendid should bid a new suit.’ Reverend Mother wouldn’t lead a singleton

roast turkey lunch that was to follow. ‘Oh yes, I see, Reverend Mother,’ the trump,’ she said. ‘And she certainly wouldn’t

Sister Brigid and Sister Cathleen, two of dark-haired novice replied, ‘but I wanted lead away from the queen of trumps. My

the convents’ novices, looked somewhat to agree hearts as trumps.’ queen must be singleton or doubleton and

nervous as they took their seats to face ‘Foolish girl!’ exclaimed the Mother of there’s no need to finesse against it.’

Sister Grace and the ancient Mother of Discipline. ‘Your partner had already done ‘Ah, yes,’ said Sister Brigid. ‘Singleton or

book was there on the table, under her ‘She had, yes, Reverend Mother, but I ‘It could hardly be more obvious to rise

convention card. Could she not, for just wanted to agree them as trumps too.’ with the king,’ muttered the Mother of

this one day a year, have left it in her cell? Unable to suppress her irritation, the Discipline.

Sister Grace smiled warmly at the two Mother of Discipline beckoned for play to Halfway through the session, the Mother

novices. ‘I believe this will be your first proceed. Declarer played low from dummy of Discipline faced Sister Benedict and

Christmas lunch with us,’ she said. ‘It’s the on the trump lead and won East’s queen Sister Myrtle. Despite submitting them-

only meal of the year where we permit our- with the ace. What now? selves to an endless stream of diets, or so

selves more than one course. I expect you’re Sister Brigid paused to make a plan for they claimed, the two nuns seemed to be

looking forward to it.’ the contract. She had five possible losers in larger than ever.

‘Yes, Sister,’ the two novices chimed in her hand – two spades and three diamonds. ‘May I offer you a Rowntree’s fruit gum,

led finger at the first board and the players diamond towards the king. If the MD held once noted that she was only ever offered

leaned forward to extract these cards: the ace of diamonds, she would lose only one of Sister Myrtle’s fruit gums when there

two diamond tricks. Brilliant! was a green one on top. Why they made

Sister Brigid cashed the ace of spades and green ones was a mystery to all concerned;

E/W Game. Dealer South. ruffed a spade with dummy’s six of trumps. no-one seemed to like them. ‘Surely you’re

♥Q club ruff and played the jack of trumps. ‘Tiny little sweets, they are. No more than

♠AJ8 now have to lose a trump trick to West’s ten. aid. ‘What a thing to say, Reverend Mother,’

♥AJ9752 The last hope was to lead a diamond to the she said, ‘on the very week when Sister

♦983 king. This enterprising manoeuvre failed Myrtle made a special effort and lost five

♣A too and the game went one down. pounds in weight.’

‘Your play was as awful as the bidding!’ The Mother of Discipline surveyed the

exclaimed the Mother of Discipline. ‘For two nuns suspiciously. ‘Really?’ she said.

West North East South Heaven’s sake, child, you must win the Looking somewhat proud of herself,

Discipline Cathleen Grace Brigid All memory of the deal had flown from myself every day for a week, first thing

1♥ Sister Brigid’s mind. ‘Yes, I see, Reverend when I woke up. I lost two pounds on

Pass 2♥ Pass 3♥ Mother,’ she replied. ‘Win with the king.’ Monday, two pounds on Wednesday and

Pass 4♥ All Pass ‘Ace of spades, ruff a spade low, ace of one pound on Friday.’

clubs, ruff a spade low,’ continued the ‘You see?’ exclaimed Sister Benedict. ‘A

‘I’ve never heard such poor bidding!’ Mother of Discipline. ‘Then you return to total of five pounds.’