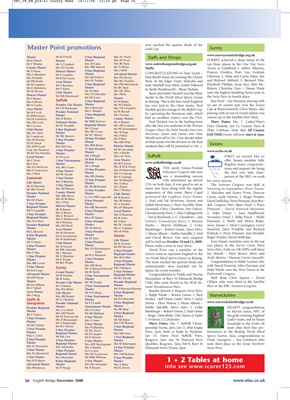 now reached the quarter finals of the

Mr N Cardin Premier Life Master Master Ms M Chahine has ever had in the Open teams. Paul an out of county pair won the Sussex

Mrs L Murphy Hackett got his revenge in the Buffett Cup,

1 Star Regional Mr J Troiano by captaining the European side, which playing with an out of county player, was

Mrs B Barker Master County Master had an excellent victory over the USA. runner up in the Satellite Pairs final.

League when the field breaks into two Plate, Cobham. Note that All County

divisions. Jason and Justin and Alan DAYTIME events will now start at 1pm.

20 Star Premier Mr P West Mould start off in Div. 2 but should either

Mrs BM Bueno District Master weekend they will be promoted to Div. 1.

tions and support for being

Mrs MS Dunbar Mr A Longrigg was a resounding success person of the EBU; we wish

Mrs P Blatchly Mrs M Margetts with attendance up almost her every success.

Mr KJ Bawdon 2 Star Master 25% on both days. It was good to see so The Autumn Congress was held at

many new faces along with the regular Steyning in September: Pivot Teams:

Mr N Starks Club Master 2 Star Premier will be held on October 10 and 11, 2009. Four Sussex members were in the top

1 Star Master Surrey unfortunately were knocked out by

Ms A Haring-Pedrocchi Mrs A Burgess Mike Walsh, won the Pivot Teams at the

Mr DC Doyle Pairs, 2pm, both at Stoke by Nayland. formances at the Beijing World Mind