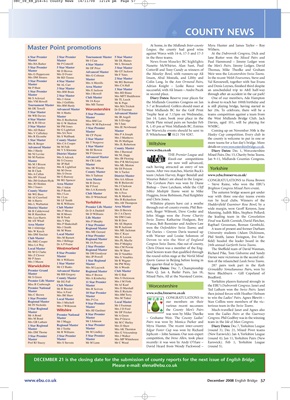 At home, in the Midlands Inter-county Myra Hunter and James Taylor – Roy

Cotterill and Tony Cundy as winners of Thomas, Mike Theelke and Graham

Master Mrs J Rowell in second place. through after an accident in the car park!

Mrs MA Trickett 5-7 at Bransford. Golfers should meet at is still playing bridge, having started in

Mr DE Towell Advanced Master Worcestershire Dr D Trueman West Midlands BC for the Golf Print her 20s. To celebrate, there will be a

5 Star Premier Trophy heat at 7.15pm on Wednesday, teams competition against a team from

– Steve Raine, who won the EBU’s

Mr A Harris Mr LF Smith Mrs B Richardson and Chris Jones. run by local clubs. Winners of the

A team of present and former Durham

Local Master Westmorland Chris Dixon was a member of the Eng- The Sheffield team of David Waxman,

287 pairs took part in the Kath

Mixed Pairs. All at the Nursteed Centre. Bradford.

David Heard from Wendy Packwood – (round 5).

DECEMBER 21 is the closing date for the submission of county reports for the next issue of English Bridge.