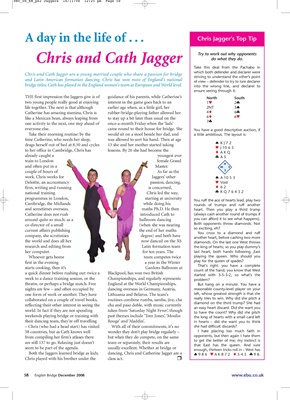 Chris and Cath Jagger Try to work out why opponents

do what they do.

Take this deal from the Pachabo in

which both defender and declarer were

and Latin American formation dancing. Chris has won most of England’s national of view – defender to try to lure declarer

bridge titles; Cath has played in the England women’s team at European and World level. into the wrong line, and declarer to

ensure seeing through it:

THE first impression the Jaggers give is of guidance of his parents, while Catherine’s North South

life together. The next is that although earlier age when, as a little girl, her 2NT 3♠

Catherine has amazing stamina, Chris is rubber-bridge-playing father allowed her 4♦ 6♣

like a Mexican bean, always leaping from to stay up a bit later than usual on the 6♦ 6♥

one activity to the next, one step ahead of once-a-month Friday when the ‘lads’

everyone else. came round to their house for bridge. She You have a good descriptive auction, if

Take their morning routine: by the would sit on a stool beside her dad, and a little ambitious. The layout is:

time Catherine, who needs her sleep, was allowed to sort his hand. Then at age

drags herself out of bed at 8.30 and cycles 13 she and her mother started taking ♠ KJ72

to her office in Cambridge, Chris has lessons. By 26 she had become the ♦ AKQ

already caught a youngest ever ♣ A5

and often put in a Master. W E

couple of hours of As far as the

firm, writing and running is concerned, ♦ 62

programmes in London, starting at university You ruff the ace of hearts lead, play two

Cambridge, the Midlands while doing his rounds of trumps and ruff another

and sometimes overseas. maths Ph.D. He then heart. Then you play a third trump

around quite so much: as a ballroom dancing you can afford it to see what happens).

co-director of a small (when she was nearing Both opponents throw diamonds. Not

current affairs publishing the end of her maths

You cross to a diamond and ruff

company, she scrutinises degree) and both have another heart, before cashing two more

the world and does all her now danced on the XS diamonds. On the last one West throws

research and editing from Latin formation team the king of hearts; so you play dummy’s

her computer. for ten years. The last heart, both hands following ,East

Whoever gets home team competes twice playing the queen. Who should you

first in the evening a year in the Winter play for the queen of spades?

That’s right: you have a complete

count of the hand; you know that West

a quick dinner before rushing out: twice a Blackpool, has won two British started with 3-5-3-2, so what’s the

week to a dance training session, or the Championships, and regularly represents problem?

theatre, or perhaps a bridge match. Free England at the World Championships, But hang on a minute. You have a

nights are few – and often occupied by dancing overseas in Germany, Austria, reasonable county-level player on your

one form of work or another. They have Lithuania and Belarus. The team’s left, whose greatest strength is that she

collaborated on a couple of travel books, routines combine rumba, samba, jive, cha really tries to win. Why did she pitch a

diamond on the third trump? She had

reflecting their other interest in seeing the cha and paso doble, with music currently

an easy heart discard. Did she want you

world. In fact if they are not spending taken from ‘Saturday Night Fever’, though to have the count? Why did she pitch

weekends playing bridge or training with past themes include ‘Tom Jones’, ‘Moulin the king of hearts with a small card left

their dancing team, they’re off travelling Rouge’ and ‘Aladdin’. in hearts – did she want you to think

– Chris (who had a head start) has visited With all of their commitments, it’s no she had difficult discards?

58 countries, but as Cath knows well wonder they don’t play bridge regularly – I hate placing too much faith in

from compiling her firm’s atlases there but when they do compete, on the same opponents, but then again I hate them

to get the better of me; my instinct is

are still 137 to go. Relaxing just doesn’t team or separately, their results are

that East has the queen. And sure

seem to be part of the agenda. usually excellent. Whether at bridge or enough, thirteen tricks roll in – West has

Chris played with his brother under the class act.