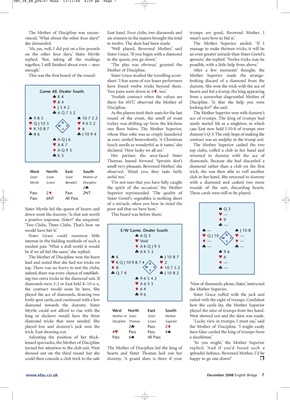 The Mother of Discipline was uncon- East hand. Four clubs, two diamonds and trumps are good, Reverend Mother. I

vinced. ‘What about the other four days?’ six winners in the majors brought the total wasn’t sure how to bid it.’

she demanded. to twelve. The slam had been made. The Mother Superior smiled. ‘If I

‘Ah, yes, well, I did put on a few pounds ‘Well played, Reverend Mother,’ said manage to make thirteen tricks, it will be

on the other four days,’ Sister Myrtle Sister Grace. ‘If you begin with a diamond an even greater miracle than Sister Gretel’s

replied. ‘But, taking all the readings to the queen, you go down.’ sprouts,’ she replied. ‘Twelve tricks may be

together, I still finished about even – near ‘The play was obvious,’ grunted the possible, with a little help from above.’

enough.’ Mother of Discipline. After a few moments’ thought, the

This was the first board of the round: Sister Grace studied the travelling score- Mother Superior made the strange-

sheet. ‘I fear some of our lesser performers looking discard of a diamond from the

have found twelve tricks beyond them. dummy. She won the trick with the ace of

Game All. Dealer South. Two pairs went down in 6♦, too.’ hearts and led a trump, the king appearing

♥84 there for 6NT,’ observed the Mother of Discipline. ‘Is that the help you were

♥9652 turkey was drifting up from the kitchens surely started life as a singleton, in which

♠AQJ6 as ever, smiled benevolently. ‘A Christmas contract was an endplay in the trump suit.

♥AK7 lunch smells as wonderful as it tastes,’ she The Mother Superior cashed the two

♦AQ93 declared. ‘How lucky we all are.’ top clubs, ruffed a club in her hand and

♣K3 Her partner, the sour-faced Sister returned to dummy with the ace of

Thomas, leaned forward. ‘Sprouts don’t diamonds. Because she had discarded a

smell very pleasant, Reverend Mother,’ she diamond rather than a club on the first

West North East South observed. ‘Mind you, they taste fairly trick, she was then able to ruff another

2♣ the spirit of the occasion,’ the Mother rounds of the suit, discarding hearts.

Pass 2♦ Pass 2NT Superior reprimanded. ‘The quality of These cards were still to be played:

Pass 6NT All Pass Sister Gretel’s vegetables is nothing short

of a miracle, when you bear in mind the

Sister Myrtle led the queen of hearts and poor soil that we have here.’ ♠ Q3

down went the dummy. ‘Is that not worth This board was before them: ♥ —

a positive response, Sister?’ she enquired. ♦ 9

the contract would soon be hers. She ♦64 the Mother Superior.

played the ace of diamonds, drawing two ♣96 Sister Grace ruffed with the jack and

lowly spot cards, and continued with a low exited with the eight of trumps. Confident

diamond towards the dummy. Sister how the cards lay, the Mother Superior

Myrtle could not afford to rise with the West North East South played the nine of trumps from her hand.

king or declarer would have the three Mother of Sister Sister Mother West showed out and the slam was made.

diamond tricks that were needed. She Discipline Thomas Grace Superior ‘Lucky view in trumps, I must say,’ said

played low and dummy’s jack won the 2♣ Pass 2♦ the Mother of Discipline. ‘I might easily

trick, East showing out. 4♥ Pass Pass 4♠ have false-carded the king of trumps from

Adjusting the position of her thick- Pass 6♠ All Pass a doubleton.’

lensed spectacles, the Mother of Discipline ‘So you might,’ the Mother Superior

turned her attention to the club suit. West The Mother of Discipline led the king of replied. ‘And if you’d found such a

showed out on the third round but she hearts and Sister Thomas laid out her splendid defence, Reverend Mother, I’d be

could then concede a club trick to the safe dummy. ‘A grand slam is there if your happy to go one down!’