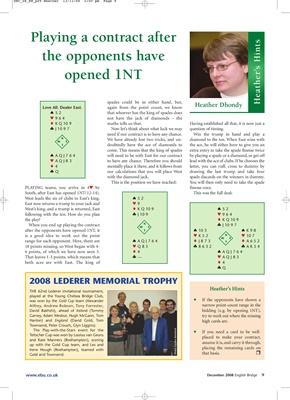 Playing a contract after

spades could be in either hand, but,

Love All. Dealer East. again from the point count, we know Heather Dhondy

♠52 that whoever has the king of spades does

♦ K Q 10 9 maths tells us that. Having established all that, it is now just a

need if our contract is to have any chance. Win the trump in hand and play a

We have already lost two tricks, and un- diamond to the ten. When East wins with

S doubtedly have the ace of diamonds to the ace, he will either have to give you an

come. This means that the king of spades extra entry to take the spade finesse twice

♠ AQJ764 will need to be with East for our contract by playing a spade or a diamond, or get off

♥ AQJ83 to have any chance. Therefore you should lead with the ace of clubs. If he chooses the

♦ 4 mentally place it there, and it follows from latter, you can ruff, cross to dummy by

with the diamond jack. spade discards on the winners in dummy.

This is the position we have reached: You will then only need to take the spade

PLAYING teams, you arrive in 4♥ by finesse once.

East now returns a trump to your jack and ♥ 9

When you end up playing the contract W E

both aces are with East. The king of ♦ 4

Garvey, Adam Mesbur, Hugh McGann, Tom try to work out where the missing

The Play-with-the-Stars event for the

placed to make your contract,

up with the Gold Cup team, and Les and

assume it is, and carry it through,

Irene Hough (Roehampton), teamed with placing the remaining cards on

Gold and Townsend. that basis.