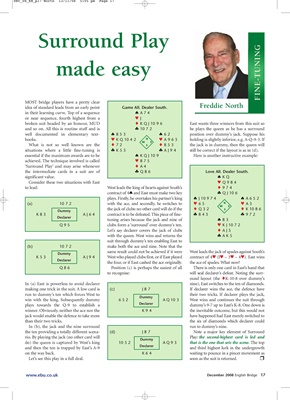 MOST bridge players have a pretty clear

in their learning curve. Top of a sequence ♠A74

or near sequence, fourth highest from a ♥J

situations where a little fine-tuning is ♣ K53 ♣AJ94 still be correct if the layout is as in (d).

essential if the maximum awards are to be ♠ K Q J 10 9 Here is another instructive example:

achieved. The technique involved is called ♥875

‘Surround Play’ and may arise whenever ♦A4

the intermediate cards in a suit are of ♣Q86 Love All. Dealer South.

to lead: West leads the king of hearts against South’s ♦974

tuning arises because the jack and nine of ♠83

with the queen. West wins and returns the ♣AK5

the four, or if East cashed the ace originally. the ace of spades. What now?

to recognise: will seal declarer’s defeat. Noting the surr-

In (a) East is powerless to avoid declarer nine), East switches to the ten of diamonds.

making one trick in the suit. A low card is (c) J87 If declarer wins the ace, the defence have

run to dummy’s ten which forces West to their two tricks. If declarer plays the jack,

win with the king. Subsequently dummy 652 A Q 10 3 West wins and continues the suit through

plays towards the Q-9 to establish a Declarer dummy’s 9-7 up to East’s K-8. One down is

winner. Obviously, neither the ace nor the K94 the inevitable outcome, but this would not

than their two tricks. the six of diamonds which declarer could

In (b), the jack and the nine surround run to dummy’s nine.

rio. By playing the jack (no other card will Dummy

Play: the second-highest card is led and

on the way back. K64 waiting to pounce in a pincer movement as

Let’s see this play in a full deal. soon as the suit is returned.