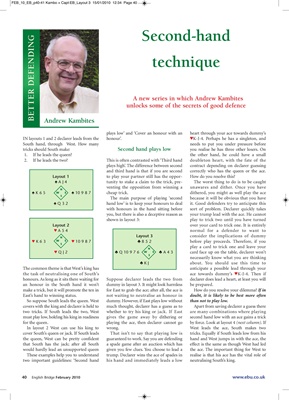 A new series in which Andrew Kambites

unlocks some of the secrets of good defence

IN layouts 1 and 2 declarer leads from the honour’. ™K-J-4. Perhaps he has a singleton, and

South hand, through West. How many needs to put you under pressure before

tricks should South make: Second hand plays low you realise he has three other losers. On

1. If he leads the queen? the other hand, he could have a small

2. If he leads the two? This is often contrasted with ‘Third hand doubleton heart, with the fate of the

plays high’. The difference between second contract depending on declarer guessing

and third hand is that if you are second correctly who has the queen or the ace.

Layout 1 to play your partner still has the oppor - How do you resolve this?

´AJ4 tunity to stake a claim to the trick, pre- The worst thing to do is to be caught

venting the opposition from winning a unawares and dither. Once you have

´Q32 hand low’ is to keep your honours to deal it. Good defenders try to anticipate this

with honours in the hand sitting before sort of problem. Declarer quickly takes

you, but there is also a deceptive reason as your trump lead with the ace. He cannot

shown in layout 3: play to trick two until you have turned

Layout 2 over your card to trick one. It is entirely

™A54 normal for a defender to want to

play a card to trick one and leave your

necessarily know what you are thinking

®KJ about. You should use this time to

the task of neutralising one of South’s ace towards dummy’s ™K-J-4. Then if

honours. As long as it sits there waiting for Suppose declarer leads the two from declarer does lead a heart, at least you will

an honour in the South hand it won’t dummy in layout 3. It might look harmless be prepared.

make a trick, but it will promote the ten in for East to grab the ace; after all, the ace is How do you resolve your dilemma? If in

East’s hand to winning status. not waiting to neutralise an honour in doubt, it is likely to be best more often

So suppose South leads the queen. West dummy. However, if East plays low without than not to play low.

covers with the king and declarer is held to much thought, declarer has a guess as to Apart from saving declarer a guess there

two tricks. If South leads the two, West whether to try his king or jack. If East are many combinations where playing

must play low, holding his king in readiness gives the game away by dithering or second hand low with an ace gains a trick

for the queen. playing the ace, then declarer cannot go by force. Look at layout 4 (next column). If

In layout 2 West can use his king to wrong. West leads the ace, South makes two

cover South’s queen or jack. If South leads That isn’t to say that playing low is tricks. Equally if South leads low from his

the queen, West can be pretty confident guaranteed to work. Say you are defending hand and West jumps in with the ace, the

that South has the jack; after all South a spade game after an auction which has effect is the same as though West had led

would hardly lead an unsupported queen given you few clues. You choose to lead a the ace. The important thing for West to

These examples help you to understand trump. Declarer wins the ace of spades in realise is that his ace has the vital role of