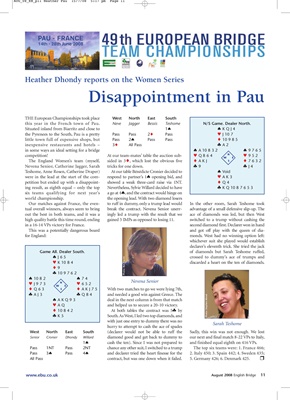 Situated inland from Biarritz and close to 1♠ ♠KQJ4

inexpensive restaurants and hotels – 3♦ All Pass ♣A2

Nevena Senior, Catherine Jagger, Sarah tricks for one down. ♣ 9 ♣J4

were in the lead at the start of the com- respond to partner’s 1♠ opening bid, and ♥AK3

petition but ended up with a disappoint- showed a weak three-card raise via 1NT. ♦Q4

six teams qualifying for next year’s a go at 4♠, and the contract would hinge on

Our matches against France, the even- to ruff in dummy, only a trump lead would In the other room, Sarah Teshome took

out the best in both teams, and it was a ingly led a trump with the result that we ace of diamonds was led, but then West

high quality battle this time round, ending gained 5 IMPs as opposed to losing 11. switched to a trump without cashing the

in a 16-14 VPs victory for France. second diamond first. Declarer won in hand

for England: monds. West had no winning option left:

whichever suit she played would establish

Game All. Dealer South. of diamonds but Sarah Teshome ruffed,

♠J65 crossed to dummy’s ace of trumps and

♠AKQ93 deal in the next column is from that match

♣K5 South. As West, I led two top diamonds, and

with just one entry to dummy there was no

hurry to attempt to cash the ace of spades

West North East South (declarer would not be able to ruff the Sadly, this win was not enough. We lost

Senior Cronier Dhondy Willard diamond good and get back to dummy to our next and final match 8-22 VPs to Italy,

1♠ cash the ten). Since I was not prepared to and finished equal eighth on 416 VPs.

Pass 1NT Pass 2NT chance any other suit, I switched to a trump The top six teams were: 1. France 466;