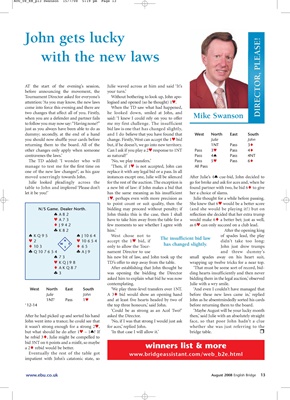 with the new laws

AT the start of the evening’s session, Julie waved across at him and said ‘It’s

before announcing the movement, the your turn.’

Tournament Director asked for everyone’s Without bothering to look up, John apo-

attention: ‘As you may know, the new laws logised and opened (so he thought) 1♥.

come into force this evening and there are When the TD saw what had happened,

two changes that affect all of you. Firstly, he looked down, smiled at John, and

when you are a defender and partner fails said: ‘I knew I could rely on you to offer Mike Swanson

to follow you may now say: “Having none?” me my first challenge. The insufficient

just as you always have been able to do as bid law is one that has changed slightly,

dummy; secondly, at the end of a hand and I do believe that you have found that West North East South

you should now shuffle your cards before change. Firstly, West can accept the 1♥ bid Julie John

returning them to the board. All of the but, if he doesn’t, we go into new territory. 1NT Pass 3♦

manage to test me for the first time on ‘Then, if 1♥ is not accepted, John can All Pass

one of the new law changes?’, as his gaze replace it with any legal bid or a pass. In all

moved unerringly towards John. instances except one, Julie will be silenced After Julie’s 4♠ cue-bid, John decided to

Julie looked pleadingly across the for the rest of the auction. The exception is go for broke and ask for aces and, when he

table to John and implored ‘Please don’t a new bit of law: if John makes a bid that found partner with two, he bid 6♦ to give

let it be you!’ has the same meaning as his insufficient her a choice of slams.

1♥, perhaps even with more precision as Julie thought for a while before passing.

to point count or suit quality, then the She knew that 6♥ would be a better score

N/S Game. Dealer North. bidding may proceed without penalty; if (and she would be playing it!) but on

♠A82 John thinks this is the case, then I shall reflection she decided that her extra trump

♥A73 have to take him away from the table for a would make 6♦ a better bet; just as well,

♦J942 few moments to see whether I agree with as 6♥ can only succeed on a club lead.

♦65 only to allow the Tour- has changed slightly. John just drew trumps

♠73 his new bit of law, and John took up the small spades away on his heart suit,

♥KQJ98 TD’s offer to step away from the table. wrapping up twelve tricks for a near top.

♦AKQ87 After establishing that John thought he ‘That must be some sort of record, bid-

asked him to explain what bid he was now bidding them in the legal auction,’ observed

contemplating. Julie with a wry smile.

West North East South ‘We play three-level transfers over 1NT. ‘And even I couldn’t have managed that

Julie John A 3♦ bid would show an opening hand before these new laws came in,’ replied

12-14 the top three honours,’ said John. before returning them to the board.

‘Could be as strong as an Acol Two?’ ‘Maybe August will be your lucky month

After he had picked up and sorted his hand asked the Director. then,’ said Julie with an absolutely straight

John went into a trance; he could see that ‘No, if I was that strong I would just ask face, so that poor John hadn’t a clue

it wasn’t strong enough for a strong 2♥, for aces,’ replied John. whether she was just referring to the

bid 3NT on 6 points and a misfit, so maybe

Eventually the rest of the table got www.bridgeassistant.com/web_b2e.html

impatient with John’s catatonic state, so