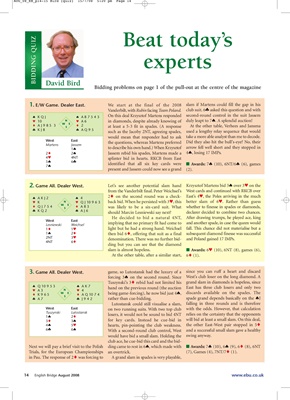 1. E/W Game. Dealer East. We start at the final of the 2008 slam if Martens could fill the gap in his

Vanderbilt, with Rubin facing Team Poland. club suit. 6♣ asked this question and with

♣ KJ8 ♣ AQ95 used a lengthy relay sequence that would

such as the Jacoby 2NT, agreeing spades,

would mean that responder had to ask take a more able analyst than me to decode.

West East Did they also hit the bull’s-eye? No, their

the questions, whereas Martens preferred

1♠ to describe his own hand.) When Krzysztof arrow fell well short and they stopped in

present and Jassem could now see a grand (2).

2. Game All. Dealer West. Let’s see another potential slam hand Krzysztof Martens bid 3♠ over 3♥ on the

from the Vanderbilt final. Peter Weichsel’s West cards and continued with RKCB over

♦ A83 was likely to be a six-card suit. What whether to finesse in spades or diamonds,

should Marcin Lesniewski say next?

He decided to bid a natural 4NT, After drawing trumps, he played ace, king

Lesniewski Weichsel implying that no primary fit had come to and another spade, in case the queen would

1♦ 1♥ light but he had a strong hand. Weichsel fall. This chance did not materialise but a

1♠ 2♦ then bid 6♦, offering that suit as a final subsequent diamond finesse was successful

2NT 3♥ denomination. There was no further bid- and Poland gained 17 IMPs.

ding but you can see that the diamond

3. Game All. Dealer West. game, so Lutostansk had the luxury of a since you can ruff a heart and discard

forcing 3♠ on the second round. Since West’s club loser on the long diamond. A

Tuszynski’s 3♦ rebid had not limited his grand slam in diamonds is hopeless, since

hand on the previous round (the auction

♣ A7 ♣ J942 rather than cue-bidding. spade grand depends basically on the ♠J

Lutostansk could still visualise a slam, falling in three rounds and is therefore

West East on two running suits. With two top club with the odds. However, that calculation

losers, it would not be sound to bid 4NT relies on the certainty that the opponents

3♦ 3♠ for key cards. Instead he cue-bid in will bid at least a small slam. On this deal,

4♠ 5♥ hearts, pin-pointing the club weakness. the other East-West pair stopped in 5♦

6♣ 6♠ With a second-round club control, West and a successful small slam gave a healthy

would have bid a small slam. Holding the swing anyway.

club ace, he cue-bid this card and the bid-

in Pau. The response of 2♦ was forcing to A grand slam in spades is very playable,