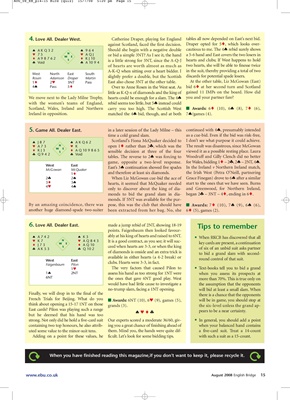 against Scotland, faced the first decision. Draper opted for 5♦, which looks over-

♠ AKQ32 ♠ 964 Should she begin with a negative double cautious to me. The 4♠ rebid surely shows

of hearts are worth almost as much as two hearts, she will be able to finesse twice

A-K-Q when sitting over a heart bidder. I in the suit, thereby providing a total of two

4♠ Pass 5♦ Over to Anne Rosen in the West seat. As bid 6♦ at her second turn and Scotland

little as K-Q-x of diamonds and the king of gained 11 IMPs on the board. How did

We move next to the Lady Milne Trophy, hearts could be enough for a slam. The 4♠ you and your partner fare?

with the women’s teams of England, rebid seems too little, but 5♠ instead could

5. Game All. Dealer East. in a later session of the Lady Milne – this continued with 4♠, presumably intended

time a cold grand slam. as a cue-bid. Even if the bid was risk-free,

♠ J87 ♠ AKQ62 Scotland’s Fiona McQuaker decided to I don’t see what purpose it could achieve.

♥ K open 1♦ rather than 2♣, which was the The result was disastrous, since McGowan

tables. The reverse to 2♠ was forcing to Woodruff and Gilly Clench did no better

3♦ 3♠ hearts, it seemed that McQuaker needed start to the ones that we have seen. Burns

only to discover about the king of dia- and Greenwood, for Northern Ireland,

monds. If 5NT was available for the pur-

ably at his king of hearts and raised to 6NT.

• When RKCB has discovered that all

key cards are present, a continuation

ceed when hearts are 3-3, or when the king of six of an unbid suit asks partner

available in either hearts (a 4-2 break) or round control of that suit.

6NT the ones that gave 6NT good play. West more than 70%. This is true only on

no-trump slam, facing a 1NT opening. will bid at least a small slam. When

Finally, we will drop in to the final of the there is a chance that the opponents

East cards? Pilon was playing such a range pears to be a near certainty.

but he deemed that his hand was too

strong. Not only did he hold a five-card suit Our experts scored a moderate 36/60, giv- • In general, you should add a point

containing two top honours, he also attrib- ing you a great chance of finishing ahead of when your balanced hand contains

uted some value to the minor-suit tens. them. Mind you, the hands were quite dif- a five-card suit. Treat a 14-count

Adding on a point for these values, he ficult. Let’s look for some bidding tips. with such a suit as a 15-count.