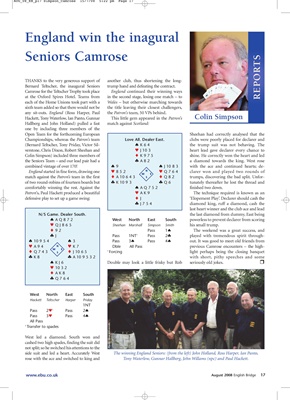 THANKS to the very generous support of another club, thus shortening the long-

at the Oxford Spires Hotel. Teams from in the second stage, losing one match – to

sixth team added so that there would not be the title leaving their closest challengers,

Hallberg and John Holland) pulled a fast match against Scotland:

one by including three members of the

Championships, whereas the Patron’s team Love All. Dealer East. clubs were poorly placed for declarer and

the Seniors Team – and our lead pair had a ♣A82 a diamond towards the king. West rose

comfortably winning the rest. Against the ♠AQ752 finished two down.

Patron’s, Paul Hackett produced a beautiful ♥AK9 The technique required is known as an

defensive play to set up a game swing: ♦J ‘Elopement Play’. Declarer should cash the

last heart winner and the club ace and lead

not split; so he switched his attentions to the

rose with the ace and switched to king and Tony Waterlow, Gunnar Hallberg, John Willams (npc) and Paul Hackett.