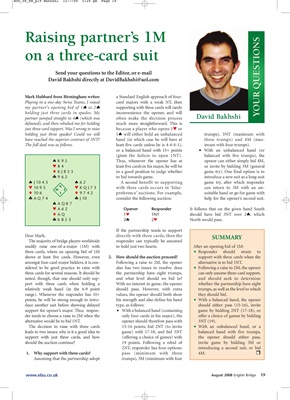 on a three-card suit

Playing in a one-day Swiss Teams, I raised card majors with a weak NT, then

holding just three cards in spades. My inconvenience the opener, and will

defeated), and then rebuked me for holding much more straightforward. This is

just three card support. Was I wrong to raise because a player who opens 1 ♥ or

holding just three spades? Could we still 1♠ will either hold an unbalanced trumps), 3NT (maximum with

have reached the superior contract of 3NT? hand (in which case he will have at three trumps) and 4M (max-

or a balanced hand with 15+ points

(given the failure to open 1NT).

• With an unbalanced hand (or

balanced with five trumps), the

♠ K95 Thus, whenever the opener has at opener can either simply bid 4M,

♥ 84 least five cards in his major, he will be or invite by bidding 3M (general

♦ KJ853 in a good position to judge whether game try). One final option is to

♣ 962 to bid towards game. introduce a new suit as a long-suit

♥ A62 Opener Responder It follows that on the given hand South

If the partnership tends to support

Dear Mark, directly with three cards, then the SUMMARY

The majority of bridge players worldwide responder can typically be assumed

readily raise one-of-a-major (1M) with to hold just two hearts. After an opening bid of 1M:

three cards, where an opening bid of 1M

shows at least five cards. However, even 2. How should the auction proceed?

• Responder should strain to

support with three cards when the

amongst four-card-major bidders, it is con- Following a raise to 2M, the opener alternative is to bid 1NT.

sidered to be good practice to raise with

three cards for several reasons. It should be

also has two issues to resolve: does

the partnership have eight trumps,

• Following a raise to 2M, the opener

can only assume three-card support,

noted, though, that one should only sup- and what level should we bid to? and should seek to determine

port with three cards when holding a With no interest in game, the opener whether the partnership have eight

relatively weak hand (in the 6-9 point should pass. However, with extra trumps, as well as the level to which

range). Whenever the responder has 10+ values, the opener should both show they should bid.

points, he will be strong enough to intro-

duce another suit before showing delayed

his strength and also define his hand

• With a balanced hand, the opener

der tends to choose a raise to 2M when the

With a balanced hand (containing

only four cards in his major), the

offer a choice of games by bidding

alternative would be to bid 1NT. opener should therefore pass with 3NT (19).

The decision to raise with three cards

leads to two issues: why is it a good idea to

• With an unbalanced hand, or a

support with just three cards, and how (offering a choice of games) with the opener should either pass,

should the auction continue? 19 points. Following a rebid of invite game by bidding 3M or

Assuming that the partnership adopt trumps), 3M (minimum with four